PLUS : TTA Prevents Traffic From Converging On Highway 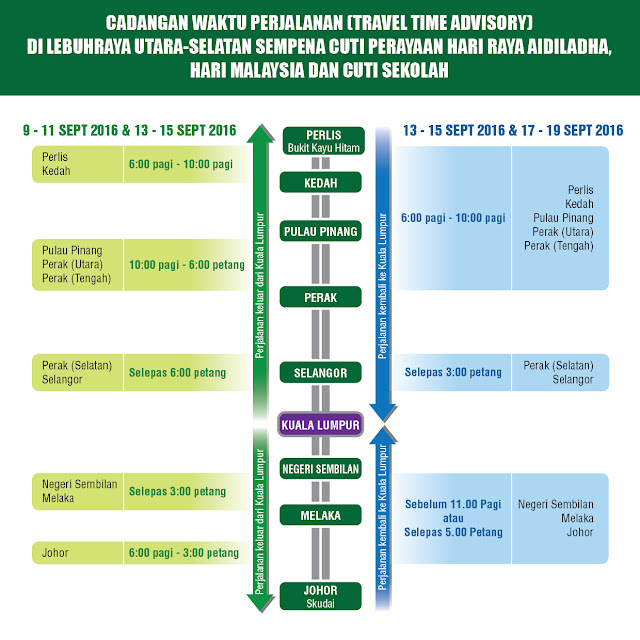 The Travel Time Advisory, which is being issued by PLUS Malaysia Berhad (PLUS) in conjunction with the holidays, is aimed at preventing vehicles heading towards various destinations from 'converging' at the same location on the highway and contribute to traffic congestion.


PLUS Managing Director, Dato' Noorizah Hj Abd Hamid said, "The TTA plays an important role in distributing traffic on the mainline as it prevents vehicles from converging at the same location at the same time. The sudden spike on the number of traffic at a particular location usually contribute to traffic congestion during festive season and peak periods."
Based on the PLUS TTA, Johor bound traffic from the Klang Valley are advised to enter the North-South Expressway (NSE) between 6 am and 3 pm. While Negeri Sembilan and Melaka bound traffic are encouraged to enter the NSE after 3 pm.
"The advisory, if adhered to, prevents vehicles heading towards Negeri Sembilan and Melaka uniting with Johor bound traffic. Instead, these vehicles will be scattered and distributed at various locations along the mainline. This will contribute to smoother traffic flow heading south. The same concept also applies to traffic heading up north," Noorizah explained.
PLUS anticipates that approximately 1.6 million vehicles will ply the NSE on the peak days during this holiday period in conjunction with Hari Raya Aidiladha, Malaysia Day and school holidays. The figure translates to a 15 percent increase from 1.4 million traffic on normal days.
"As such, we advise the public to plan their journey based on the TTA. Based on our studies and observation, traffic was generally smooth when more drivers followed the TTA during previous festive seasons," Noorizah said.
The public can refer to the TTA which is featured on the PLUS website at www.plus.com.my, the PLUSTrafik Twitter and PLUSMiles Facebook page.