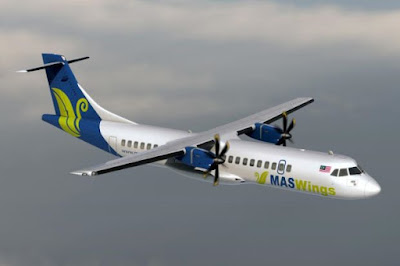 KOTA KINABALU: MASwings is offering "Super September" promotions in conjunction with Malaysia Day on Sept 16.
Describing the deals as "irresistible", the airline is offering all-in one-way fares starting from RM79 on all its routes for travel between Sept 10 and Sept 30.
In a statement, the airline said the promotions also coincide with next week's school break, giving customers the opportunity to travel back home across Sabah and Sarawak, including Tarakan in Indonesia or even go on holidays within Borneo.
As part of the promotion, passengers travelling from Kota Kinabalu will be able to enjoy the one-way all-in fares to Labuan from as low as RM79 and from RM89 to Lahad Datu, Sandakan, Tawau, Miri and Mulu respectively.
The all-inclusive offer also starts at RM109 to Bintulu and Sibu; and RM129 to Kuching from Kota Kinabalu, the statement said.
Those travelling from Kuching will also be able to enjoy fares from as low as RM79 to Sibu and RM89 to Bintulu.
Popular destinations such as Miri and Mulu are also offered at RM109 and Kota Kinabalu from as low as RM129 one-way from Kuching.
Similarly, passengers from Miri can travel one-way to Mulu, Labuan, Bintulu and Limbang for RM79, and to Sibu for RM89.
Offers for other routes such as from Sandakan to Tawau and Bintulu to Sibu can be found on MASwings' website, the company said.
MASwings is also offering Tarakan-bound passengers from Tawau an all-inclusive one-way fare from as low as RM138.
-thestar online.
Posted by PelanconganKini at 9/08/2016 10:15:00 pm