Fantastic Fifth For Kornfeil At Misano 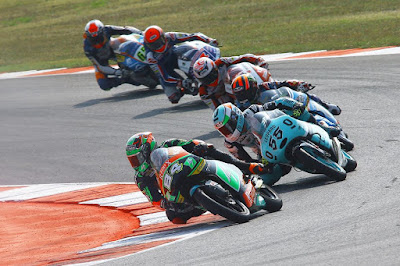 
Circuit: Misano World Circuit Marco Simoncelli
Circuit Length: 4.2 km
The San Marino Grand Prix saw DRIVE M7 SIC Racing Team rider Jakub Kornfeil claim a hard fought 5th place today, with teammate Adam Norrodin crossing the line in 23rd.
Lining up on the second row Kornfeil catapulted off the line as the lights went out, claiming third place by the first corner. Pushing hard the Czech rider relentlessly battled to stay close to the leaders whilst fending off fourth place man Jorge Navarro.
Caught in the fight for the podium the Czech rider was temporarily reduced to eighth position after a small mistake saw the 23-year-old run wide into turn nine. Determined to regain positions lost, Kornfeil immediately began fighting back, working his way up to a respectable fifth place as the chequered flag came out.
With more valuable points added to his Championship position, Kornfeil leaves Italy with an elevated position of 9th place overall.
Adam Norrodin worked well to progress throughout the 23-lap race despite losing five places on the opening lap. Aiming to fight his way into a point scoring position, the young rookie worked hard to regain his rhythm and in doing so, made good progress with his lap time.
Johan Stigefelt – Team Manager
“It was a good race today. Jakub made a great start and was very aggressive all the way through. The whole weekend he has been strong and has showed his true potential. It’s a shame we didn’t finish on the podium but nevertheless we made such a big step from Silverstone and the last races, so we are very happy with this. We have a strong package now, so there’s no reason why we can’t continue like this at Aragon.
Adam didn’t make the best start today and he got stuck in a group of slower riders for the whole race. The pace was quite up and down for him but he did improve his lap time. On the positive side he got through the whole weekend without any crashes and this is definitely progress for him. The next track is a circuit Adam knows well, so hopefully he can start off strong in FP1 and use his experience to his advantage there.”
#84 Jakub Kornfeil: P5
“Today I went into the race with a winning mentality. I really wanted to fight for the podium. Unfortunately the way the race went this became more and more difficult. During a race there is always one moment where the leading riders want to pull away and I missed this; at this time I was in fourth place and fighting with Locatelli and he passed me. This was the most important moment during the race and the reason why we didn’t finish on the podium today. Nevertheless I enjoyed it a lot today; I had some good battles and the bike was working very well, so I’m very happy for this. We just need to stay where we are and keep up the hard work. Thanks to team and all the people who came here to support me.”
#7 Adam Norrodin: P23
“The race today was tough and the result was not what I had expected after qualifying. Unfortunately after the first long straight I made a mistake and lost some positions. I then had a lot more work to do and battle my way back up to where I was. The time lost meant that the group ahead got away and I wasn’t able to catch them. Our finishing position was not so good but we improved our pace a lot and finished without any crashes this weekend. I feel much more motivated to prove myself in the next race in Aragon.” 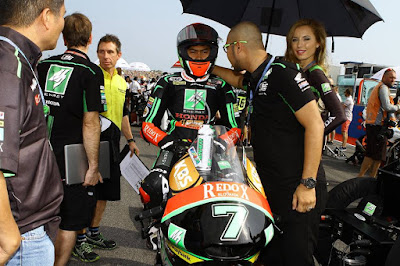