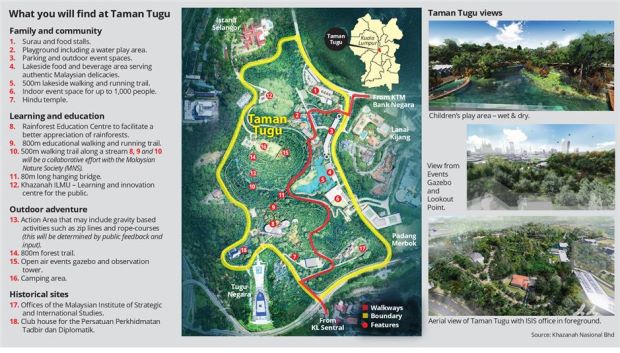 KUALA LUMPUR: The city centre here is set to have its very own rainforest park to be equipped with various amenities for the people to enjoy the natural surroundings.


The park will serve as an iconic symbol of Kuala Lumpur’s greenery in the same way as Hyde Park in London or Central Park in New York are known for.
Located on a 26.7 hectare site behind Tugu Negara or National Monument, the RM650mil public park project, known as Taman Tugu, will be opened in stages from mid-2018 to 2020.
It will have facilities such as restaurants, a camping area, canopy walks, zip lines, water park, jogging paths, walkways and cycling lanes, a gazebo and an observation deck.
An additional 5,000 local rainfo­rest trees will be planted in the park’s forested area to boost its flora.
Efforts will also be made to protect the park fauna comprising various types of insects, squirrels and other small animals by constructing nature-friendly walkways for the creatures to cross over certain sections of the park so that they can roam freely in the area.
A network of covered walkways, an underpass and overhead bridges will be built to allow visitors to walk to the park easily from various locations including KL Sentral and the Bank Negara KTM Komuter station.
The not-for-profit prestigious project is being undertaken by the Government’s strategic investment arm Khazanah Nasional Berhad in collaboration with Kuala Lumpur City Hall and supported by various stakeholders.
In launching the project, Prime Minister Datuk Seri Najib Tun Razak said the Government wants to develop Kuala Lumpur into a truly world class city in terms of not just economic activity, but its livability.
Apart from projects such as the light rail transit, mass rail transit, river of life project and the upcoming high speed rail project, Kuala Lumpur needs to have better recreational facilities and green lungs for the people.
“If Hyde Park is synonymous with London, and Central Park is synonymous with New York, I hope one day, Taman Tugu will be synonymous with KL as a global city.
“I don’t see this as something impossible because we can already see it happening,” the Prime Minister said.
Expressing his own excitement about the project, Najib said that when the first phase of the project is ready in the middle of 2018, the area will be a place where the people can come and enjoy its facilities and surroundings.
“Can you imagine – the people will have their very own mini tropical forest in the middle of the city,” he added.
The Government in July had already approved the plan to place Taman Tugu in a public trust, preserving it as a green lung for perpetuity.
Although the key features of the project has been outlined, Najib said the Government wanted the people to give their input and suggestions on what should be included in the park.
“This park is not cast in stone yet, we want the people to give their ideas for Khazanah and the Government to consider, including the (permanent) name for the Taman Tugu project, as this project still does not have a permanent name yet,” said Najib.
He added that the public also can give ideas and suggestions on facilities that could be included in the park by taking part in an online survey athttp://tamantugu.com.my/en/
Najib said that once the park is completed, foreign heads of government or state who visit Malaysia will be invited to plant a tree at the park.
The concept of the park, he said, is tied to the aim of transforming Tugu Negara or National Monument by making it closer to the people as a symbol of the sacrifice by the country’s warriors in defending the country’s independence.
Khazanah Nasional Berhad mana­­­ging director Tan Sri Azman Mokhtar in his speech said the cost to design and develop the Taman Tugu project and its infrastructure and facilities will be no more than RM650mil, of which up to RM500mil will be borne by Khazanah.
Najib added that the Government will foot the remaining estimated RM150mil cost for the project.
The first major component of the project that will be launched in mid-2018 will comprise the park and several of the walkways to facilitate public access.