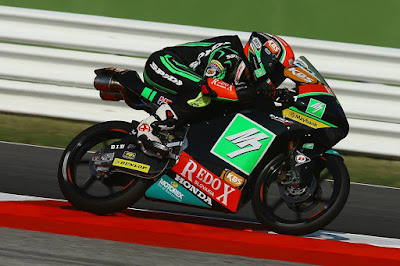 MotorLand Aragon, Spain– Monday 19th September
Circuit: MotorLand Aragon
Circuit Length: 5.1 km
Located near Alcaniz in north-eastern Spain, MotorLand Aragon will host the penultimate European round on the calendar before the MotoGP paddock embark on three consecutive races overseas.
Consisting of seventeen turns the modernistic circuit is a favourite among many riders and in 2010 was awarded the IRTA Best Grand Prix of the Year.
Following a solid fifth place finish at Misano, Jakub Kornfeil heads to Spain determined to continue his competitive form at Aragon.
Having exhibited a strong performance throughout the race weekend in Italy, which saw the Czech rider predominantly within the top five, Kornfeil is feeling confident he can take full advantage of his Honda NSF250RW machine around the Spanish Circuit.
Pleased to be returning to a track he already knows, teammate Adam Norrodin heads to Aragon eager to make a better start to his race weekend. Having previously raced at MotorLand Aragon whilst competing in the Spanish Championship, the Malaysian Moto3 rookie is confident that his previous experience around the circuit will help him to progress quicker and give him a fighting chance to qualify higher up the field and aim for the points.
#84 Jakub Kornfeil
“I like the track at Aragon quite a lot, especially the layout and how it flows. There are some sectors where I always feel very strong, in particularly the cork-screw, which I like a lot and then before the long back straight there are some beautiful parts to ride. I’m really looking forward to race again!
I think this track can be good for the Honda and I don’t think there will be a great deal of difference in comparison to the KTM, so it could be a more level playing field but let’s see on Friday. I know our Honda is strong in the high speed corners so for sure this will give us an advantage at Aragon, especially in the first part of the track. I felt very strong in Misano and I am confident I can continue like this and bring a fighting mentality to Spain.”
#7 Adam Norrodin
“I’m very happy to be going to a circuit that I have ridden at already, this is a great feeling as I know I can get up to speed quicker at this track because I don’t have to take time to learn it.
I’ve been to Aragon twice before and I enjoyed it; the layout is very nice. I think the most important part is the last chicane going into the long straight; good drive out of the corner is vital in this section.
There are both tight and high-speed corners at Aragon, which can make finding the best set-up quite challenging. You also have to factor in the circuit’s location; we are up in the mountains and this means it can get very windy.
This will be the first time I’ve ridden a factory Honda at this circuit, so I’m very excited! The bike is very strong in the high-speed corners, so I feel very positive.
I have been training hard in Barcelona since Misano, so I feel both physically and mentally prepared for this next race.” 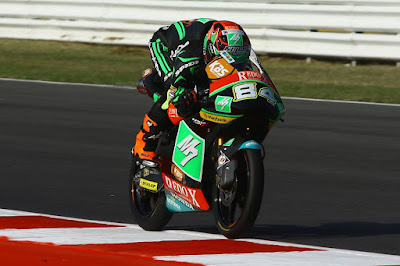