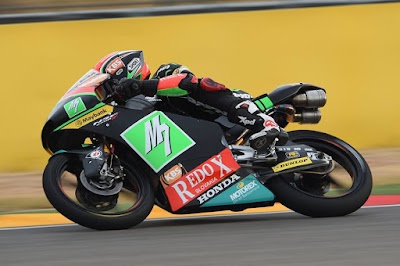 
Circuit: MotorLand Aragon
Circuit Length: 5.1 km
Bike #84 – Jakub Kornfeil
FP1: P14; 2’00.915 – 15 laps
FP2: P10; 1’59.774 – 13 laps
Bike #7 – Adam Norrodin
FP1: P16; 2’01.217 – 16 laps
FP2: P24; 2’00.939 –13 laps
DRIVE M7 SIC Racing Team rider Jakub Kornfeil completed a positive first day on track at Aragon in a solid 10th place, with teammate Adam Norrodin making steady progress and concluding the day with a combined position of 26th overall.
Having used first practice to dial into the Spanish circuit, Kornfeil set about making significant headway in the afternoon’s session. With improved front suspension settings the Czech rider shot up the time sheets to 3rd place, predominately staying within the top five thereafter.
Despite slipping down the order to 10th position as the chequered flag came out, Jakub Kornfeil is confident he and his team have found what it takes to be a front row contender in tomorrow’s Moto3 qualifying.
Eager to ride on familiar ground, Malaysian rookie Adam Norrodin got straight to work and on the pace, ending the first session in an impressive 16th place. With more time to focus on bike set-up, Norrodin and his crew worked hard find the best setting for the #7 machine, despite encountering some technical issues along the way. Undeterred by the minor set-backs the 18 year-old is feeling positive he can take the next step ahead of qualifying.
#84 Jakub Kornfeil
“Free Practice one went quite well today and I was feeling good by the end of the session but we knew we would have to make a big step in the afternoon and a big improvement with the bike. In FP2 we worked very hard and we were always near the top. We made a good plan and the mechanics did a great job, which I’m very happy and positive about. Before the end of the practice I was always in the top five. I was able to set a good lap time because I felt good on the bike; I was also able to take advantage of the slip-stream, so everything went to plan. In the last few minutes of FP2 we put new tyres in [soft in the rear and medium in the front], but unfortunately this caused a bit of chatter and pushing at the front, so not the best feeling. Regardless I was able to get into a group and I was going fast, but then we got stuck behind a lot of slower riders and couldn’t improve any further. Nevertheless I’m confident that if this hadn’t have happened I would have been able to do a low 1m59s lap time and be in the top three very easily. Our bike is working well and I feel very positive about tomorrow.”
#7 Adam Norrodin
“I’ve been looking forward to riding at Aragon all week! In FP1 this morning we did a really good job from the start. Our pace was good and I felt I could push a lot quicker than normal because I didn’t have to learn the track. At the end we were not so far away from the top, so I was very happy.
For most of FP2 we were using used tyres. Unfortunately from the start of the afternoon session we had a slight issue with the handlebars, so I didn’t feel as comfortable pushing. My mechanics worked very hard to fix this but then at the end we encountered another issue with the bike which caused us to lose some time. I had one lap towards the end of practice with new tyres and it was at this point that I was able to improve. We didn’t make as big of a step as we would have liked but we have collected a lot of valuable information today, so we know what we have to do to be better for tomorrow. For sure in FP3 we will go faster.” 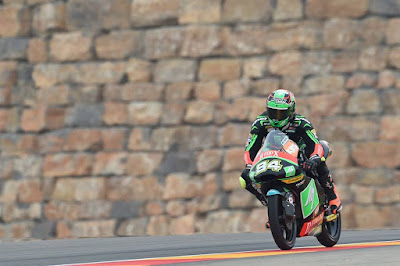