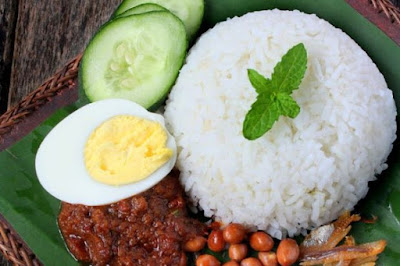 PETALING JAYA: Nasi lemak, the staple Malaysian dish, has been recognised as one of 10 most healthy international breakfasts by TIME Magazine.


Listing down the various components of the coconut rice dish, the article described nasi lemak as “supremely delicious”.
“Yes, there’s a bit more fat than is good for you (eat less rice to reduce), but it’s balanced with lots of manganese, protein, and carbs.
“The chili in the sambal also boosts the metabolism (depending which nutritionist you talk to),” according to the article on Tuesday.
Also on the list was the Turkish breakfast spread featuring olives, tomato, white cheese, eggs and sausages as well as the Israeli shakshouka in which eggs are poached in a tomato and vegetable sauce.
The Japanese breakfast of various side dishes alongside rice and the Vietnamese pho bone broth, which comes with a variety of vegetables and herbs were also listed.
Egypt’s entry was ful medames with broad beans spiced and stewed overnight, while gallo pinto, black beans with rice, from Costa Rica was also selected.
Europe’s contribution to the list consisted of porridge, with Iceland’s hafragrautur oatmeal porridge and the Russian kasha, a porridge consisting of various grains and cooked in milk, making the list.
Upma from India was featured as well, described as a thick concoction made from dry roasted semolina.
Once a farmer’s meal, nasi lemak now enjoys widespread popularity across Malaysia and is commonly considered the country’s national dish.