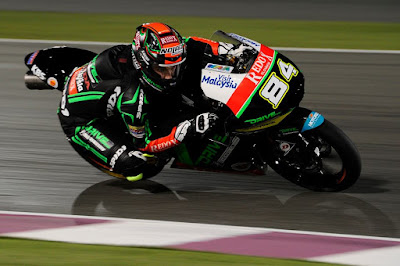 Qatar, Doha – Sunday 20th March
Circuit: Losail International Circuit
Circuit Length: 5.4 km
The Commercial Bank Grand Prix of Qatar saw a positive start to the DRIVE M7 SIC Racing Team’s 2016 Moto3 campaign, with riders Jakub Kornfeil and Adam Norrodin securing 10th and 20th place at the opening round in Qatar.
Under the floodlights of the Losail International Circuit, Moto3 rookie Adam Norrodin made a good start off the line, claiming five places on lap one. With 18 laps ahead the 17-year-old impressed with a solid race pace throughout. Battling for seventeenth position, the young Malay fought to the very end, provisionally holding nineteenth place on the last lap, before concluding his first Moto3 race in a respectable 20th place.
Starting from sixteenth place on the grid Jakub Kornfeil immediately pushed hard to battle his way through the field and up to eleventh positon on lap two. Relentlessly fighting within his group, the Czech rider became locked in a battle for tenth. Continuously dicing amongst the pack, Kornfeil fought hard to hold his position to the line, claiming tenth place as the chequered flag came out and securing the team’s first points of the season.
Johan Stigefelt – Team Manager
“The conditions today were good and both riders had a much better Warm Up than qualifying yesterday. We made a good step this afternoon with our set-up and both Jakub and Adam felt good on their bikes. Coming into the race our goal was always top ten for Jakub, which he did, so I’m pleased about this. He missed out a little in the middle of the race to go with the front group but still we scored points in our first race of the year and this is very important. Adam did a great race today; he was lapping very fast the whole race through and was less than a second per lap off the pace of the leaders. He had a good fight with Pawi, Ono and Rodrigo; we saw and a big effort from him today and we’re impressed with his performance. The way he rode and the way he went into the race mentally was great. Twentieth maybe doesn’t sound so good but it is a solid effort for his first race in the Championship.”
#84 Jakub Kornfeil: P10
“I feel very good with the result today, especially after having some difficult moments in qualifying. Already in Warm Up we made some very good improvements and I have to say a big thanks to my crew chief for this. We found a good combination with the tyres and suspension and the bike was working so well. I really enjoyed riding! It was a beautiful race because we had so many battles and so much passing every lap. I’m happy that I won the fight in my group. I wanted to break away with Bastianini many laps before the end but unfortunately I never arrived to the first corner first. This is one thing we need to look at over the next week; I think we still need to understand the gearbox a bit more on the Honda. Anyway I am very happy after all of these days here in Qatar, we found a good setting and we could make a good result. Top ten is a good start to the season and this is very important. For sure our chances were higher today but I’m happy to take this position and come away with points. Thanks again to my team and the sponsors for their support.”
#7 Adam Norrodin: P20
“I’m so happy to have had my first race in Moto3. It was a great feeling. The qualifying didn’t go well yesterday and I knew it would not be easy starting from 27th place, so I prepared so much last night and this morning about how to be in the race. Warm Up went really well and I finished the session in 16th; I felt a lot more confident and comfortable with the bike. The team did a really good job with the set-up today and I must thank them because I had such a good feeling with it throughout the race. This weekend has been tough so I’m pleased to have a positive result. Thank you to Sepang Circuit and all the sponsors for this opportunity; I hope to continue my progress and improve more every round.” 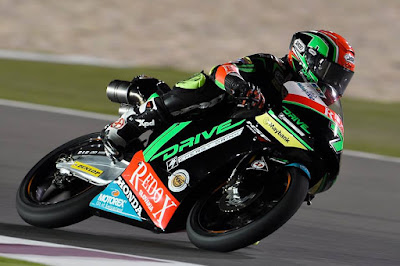