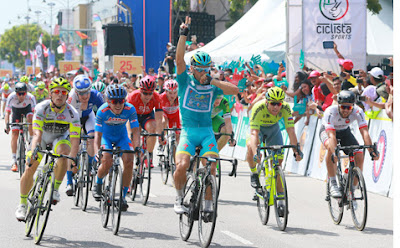 MELAKA - Andrea Guardini of Astana made it four as he also won the conclusive stage of the 2016 Le Tour de Langkawi in the middle of the historical attractions of Melaka while South Africa’s Reinardt Janse van Rensburg of Dimension Data took the overall classification of the 21st edition of Asia’s premier stage race.

A major event in stage 8 starting from Batu Pahat was the first intermediate sprint at Semerah, km 16. The winner was no less than yellow jersey wearer Janse van Rensburg. Interestingly, veteran climber Francisco Mancebo of Skydive Dubai was second, which enabled him to enter the top 5 overall while Luca Chirico of Bardiani-CSF moved up to the top 10 thanks to his third place at that point of the race.

A breakaway finally took shape after 40km of racing, involving Seo Joo Yong (KSPO), Chiu Ho San (HKSI) and Loh Sea Keong (Malaysia). As the peloton didn’t react, their lead increased to 5.20 only 15km further. Teams Drapac, Astana and Dimension Data combined forces to set the pace of the peloton in order to catch the escapees on time for another conclusive bunch gallop. It was all together with ten kilometers to go.

Melaka’s famous and tiny street Jonker Walk made the fight for positions more complicated than usual, Guardini noted. The Italian commented: “I’m happy to win here again in Melaka. I remember very well when I first did it in 2012. I knew there was a head wind to finish but I sprinted with a good timing. It would have been hard to get better results than four stage wins in eight days of racing. The fights for sprinting have all been highly competitive.”

As he won four stages like last year, Guardini reached the exceptional total of 22 stage victories in six straight participations to Le Tour de Langkawi, a race in which he’s now the iconic rider.

Janse van Rensburg won the overall classification in his first attempt. “I was a bit nervous today”, he acknowledged. “I was counting down the kilometers and I was relieved when I saw the 3km to go mark. This is my first stage race victory since 2012 [when he joined the World Tour, firstly with Argos-Shimano]. It’s been a long time. I’m happy with this breakthrough victory. This is definitely the biggest win of my career. It’s a UCI H.C. race, a very important one. It’s a good race with a good organization. I wasn’t sure to come here. I was initially a replacement rider but we came here as defending champions and we’re delighted we’ve made it again.”

Colombians Miguel Angel Lopez of Astana and Daniel Jaramillo of Unitedhealthcare accompanied him on the podium for the top 3 awards. China’s Wang Meiyin of Hengxiang won the King of the Mountains for the second time after 2013. “As a team, we’re thankful to the organizers to have allowed us to ride aggressively during the whole week”, the attacker from the Shandong province said.

For the first time, a Malaysian won the best Asian rider classification even though two splits in the bunch reduced Adiq Hussainie Othman’s advantage to Masakazu Ito to two seconds. “It’s not much but enough to bring the white jersey home and I’m very happy with that”, Adiq explained. “This jersey isn’t only mine, it belongs to the whole team who helped me defend it since stage 4. I’ve worked to lose weight and climb better, now I hope to keep the momentum for the numerous races to come on the Asia Tour.”

Once again, champions from all continents have enriched the fame of Malaysia and Le Tour de Langkawi with a positive message delivered to the world.
-www.ltdl.com.my
Posted by PelanconganKini at 3/02/2016 10:53:00 pm