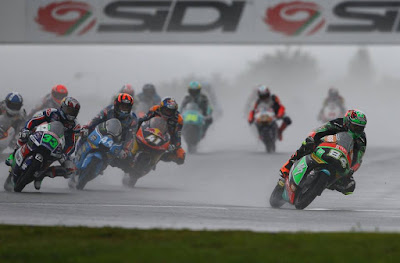 
Circuit: Automotodrom Brno
Circuit Length: 5.4 km
As the rain clouds descended upon the Automotodrom Brno, DRIVE M7 SIC Racing Team rider Jakub Kornfeil concluded his Home Grand Prix with a solid 6th place finish.
Adding more valuable points to his Championship position, the 23-year-old retains 10th place overall.
Following a superb Warm Up that saw Adam Norrodin finish the first wet practice of the weekend in 7th place, the Malaysian rookie began the 19 lap race with high hopes.
Despite making a good start off the line, Norrodin found himself being reined in on the opening lap, sending him back down the field to 22nd place. Working hard, the 18-year-old looked to have found his rhythm as he battled his way back through the field to 16th place, until an unfortunate mistake at turn ten saw the Malaysian rider crash out.
Johan Stigefelt – Team Manager
“It was a difficult race today; in these conditions it’s very hard to keep the concentration all the way through. Jakub made a good start and pushed very well at the beginning. He was in the front and up to P2 but he said it was very difficult to keep the speed and lap times consistent. The group behind caught him and he tried to hold them off as much as he could; he did a good job. Finishing top six in these conditions is very good, so we are pleased. Adam had a great warm up this morning, so we had high hopes for him in the race. Unfortunately he made another mistake in the wet and crashed out. This is not good and I’m not happy with it of course but Adam is OK, he’s not hurt and that’s the most important thing. He did a good qualifying in the dry yesterday and he has definitely made progress this weekend, so we just have to look forward now and keep moving in the right direction.”
#84 Jakub Kornfeil: P6
“I feel okay after the race; I hope that I made the Czech supporters happy because that is the most important thing to me here. From the beginning of the race for sure it looked like we could possibly take a podium; I wanted to go as fast as possible from the beginning to break away and take an advantage. Unfortunately there were many riders still right behind me. I did my best but I couldn’t go any faster. In the end, around the last six laps, there was a lot more surface water on track and the wet tyres were starting to lose their grip. This combination was not good for me and from one lap to another I went three seconds slower and this was the big problem with today’s race. Nevertheless I have to say thanks to the team for the great bike. Sixth position is good for us because we leave Brno with more points for the Championship.”
#7 Adam Norrodin: DNF
“From the beginning of the race I felt really confident because we had such a good warm up. I made a good start off the line but then other riders were passing me on the straight, so I dropped back to P22 on the first lap. I knew I had to hurry up and catch the front group. I started to catch the riders in front and one by one I managed to work my way up to P16. The rider in front of me was pushing hard to make a good lap time to catch the group in front, so I decided to just stay behind him and make a good rhythm the same as him; I didn’t want to start fighting and lose the group ahead. It was working but then in turn ten I tried to close the gap a lot more and crashed. I didn’t expect it at all because I was riding so smooth but the rear wheel just slid right round and I high-sided. I’m sorry to the team and my mechanics for this race. I will come back stronger.” 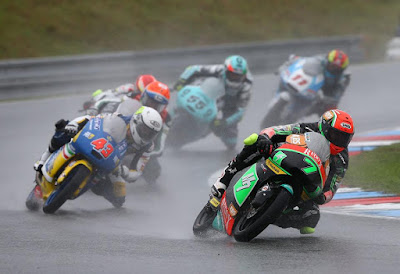