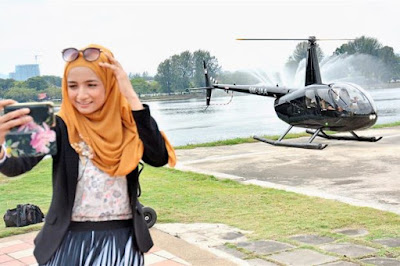 KUALA LUMPUR: Now you can take to the skies of Kuala Lumpur following the launch of a helicopter tour of the city.


Called the KL Sky Tour and operated by Cempaka Heli­copters in collaboration with the City Hall and the Kuala Lumpur Tourism Bureau, the flights take off from a helipad at Tasik Titiwangsa.
The service was launched by Transport Ministry special adviser Tan Sri M. Kayveas and Deputy Federal Territories Minister Senator Datuk Loga Bala Mohan.
Among those who attended the launch were Cempaka Helicopters chairman Datuk Zakaria Abdul Rahman and executive director Datuk James Ashley Greaves.
Greaves pointed out that the helicopter tour was unmatched for a city tour compared to any other helicopter tours around the world as not only were there city skylines, there were mountains and jungles all only minutes away by air.“We thank City Hall for providing this great location for the helipad,” said Zakaria.
The shortest ride lasts six minutes and includes all the iconic landmarks of Kuala Lumpur but there are also rides of 15, 30 and 45 minutes for those with greater spending power, the longest of which goes all the way to Genting Highlands and back.
Prices start from RM198 not including GST but a flight needs a minimum of three people.
Cempaka Helicopters is already operating aerial tours around Langkawi but there are plans to expand the network to cover more destinations in Peninsular Malaysia.
The tours are open for bookings at www.klskytour.com.