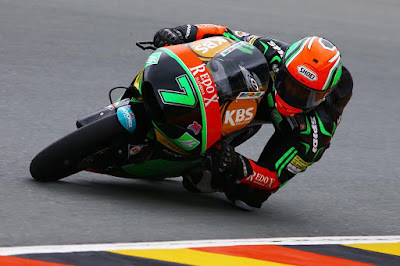 Red Bull Ring – Spielberg, Austria – Monday 8th August
Circuit: Red Bull Ring
Circuit Length: 4.3 km
Following a three week break in the Championship, the DRIVE M7 SIC Racing Team make their way to the beautiful Murtal-region of Styria in Austria, where a new circuit addition to the calendar will kick off the second half of the season.
Round ten see’s the two-wheeled action resume at the spectacular Red Bull Ring circuit. The Austrian Grand Prix will mark the start of a busy sequence of events for both the teams and riders, with the second back-to-back race of the year to follow in Brno, before heading to Silverstone just one week later for the British Grand Prix.
Currently 9th in the Championship with 58 points to his name, Jakub Kornfeil is motivated for a strong second half to the season. Securing a hard fought 4th place finish at the previous round in Germany, the Czech rider is determined to claim his first podium finish of the year.
With valuable experience accumulated, Moto3 rookie Adam Norrodin is keen to put all that he has learned into action, as he targets a point scoring result.
#84 Jakub Kornfeil
“During the break I had a small vacation, which was great for the head, just to relax a little and reset. Since then I have been focussing on my training and preparing for the next Grand Prix. At home I have been mainly focussing on bicycle riding, gym work and running. I have also been competing in a couple of Jet Surf races, which has been really good. I like to continue racing because it’s good to keep your competitive mentality sharp; it doesn’t matter which discipline you are competing in, as long as you are continuing to push yourself, always trying to improve and battling with others.
From what I’ve seen from videos, the Red Bull Ring looks very good. I think the biggest mechanical challenge at this track will be with the gear box; every corner looks completely different so finding the best set-up may be quite difficult. It also has only ten corners in total, so for sure it will be important to have very good corner speed to have a strong bike. I think it will be a challenging weekend but I’m very excited for this next race in Austria.”
#7 Adam Norrodin
“I have been in Barcelona training throughout the summer break. The weather has been good so the conditions have been perfect for me to do a lot of cycling and trekking. I’ve also been working hard in the gym to keep my fitness level up. I’ve had a few days off in between just to relax a little but then I focussed again on training; everyday working to become stronger and prepare for the next race.
From what I’ve seen of the new circuit, I’m really looking forward to riding there. It will be more or less a level playing field for the majority of the Moto3 field, which is good for us. It’s new for everyone so we can see who adapts to it the best from the start. It looks like there is quite a bit of variation in terms of speed throughout the layout.
We are always pushing hard to make a point and this is how we will continue for the remainder of the season. For this next race we really need to plan much better than before; keep calm, push hard and remain focussed. We are ready to fight again in Austria!” 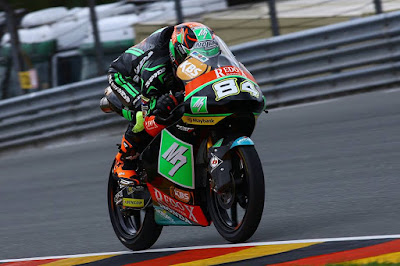