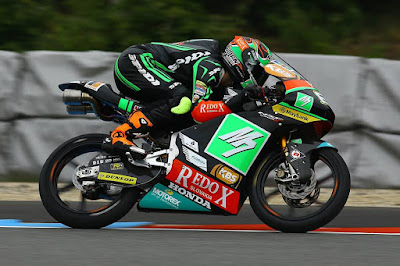 
Circuit: Silverstone
Circuit Length: 5.9 km
This weekend the MotoGP paddock returns to the prestigious Silverstone Circuit for round twelve of the Championship.
The historic motorsport venue holds good memories for the DRIVE M7 SIC Racing Team following Jakub Kornfeil’s heroic second place finish in last year’s British Grand Prix; marking the team’s first podium finish of 2015.
This second half of the season will see the Czech rider perform at some of his strongest circuits on the Calendar and following his success last year, Kornfeil is hopeful that Silverstone could be the track to upturn his fortunes once again
Feeling confident and hungry to claim his first ever victory in Moto3, Kornfeil is determined to set the positive momentum rolling with a strong result this weekend.
Continuing to learn and develop in his rookie year, teammate Adam Norrodin has his sights firmly set on improving his race results. Having acknowledged his need to further develop his riding style, the young Malaysian man is eager to prove his ability with a solid finish at the British Circuit.
#84 Jakub Kornfeil
“I’m really looking forward to the British Grand Prix this year; I have good memories from Silverstone. My favourite part of the track is after the long straight (the third sector), where there is a right-hand corner, a short straight and then a chicane going left and right; it’s a beautiful part to ride! I also like the very last section of the track leading up to the start/finish.
I think the Honda will be especially competitive in the fast corners and in general I think this circuit can be good for us. I feel very optimistic about this weekend. We have a strong gear box and the speed of our bike in the last two races has been very good, so I’m excited. After Austria my crew chief and I talked a lot about improving our qualifying and we did this well in Brno, so I hope to do the same again. It’s so important to start from the first three rows at Silverstone because the track is so long. If we can do this we can definitely go with the first group in the race and fight for a top five result; this is the plan and this is what we will be pushing for!”
#7 Adam Norrodin
“I’ve never been to Silverstone before, so it’s another new track for me to learn. From what I’ve seen of it on television, I’m confident I can do this quite quickly and be up to speed in second practice. It looks like a very fast track but this should be good for us because our bike has good speed. It’s going to require a lot of confidence to be fast at Silverstone but I like riding fast corners, so I’m looking forward to getting on track.
My riding has improved a lot since Qatar but for sure it’s still not perfect. I have made mistakes but I am continuing to learn from them. My aim at Silverstone is to study the stronger riders more and adapt my style. I need to be smoother and focus harder on my position on the bike.
The team and my crew chief are helping me so much to understand more and step by step I am making progress. Race by race I know I am improving but I need to show this in my results. I hope at Silverstone we can take the next step and make a better job; this is what we will be focussing on. I feel fresh in the head for this next race and I’m ready to work hard.” 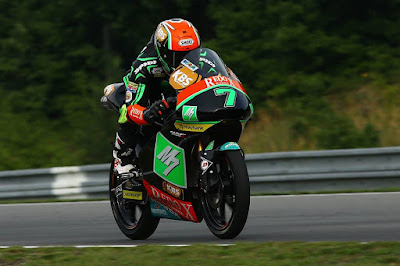