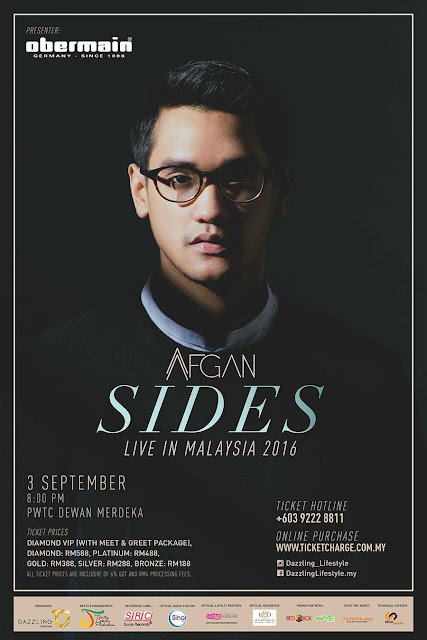 Kuala Lumpur (August 10, 2016) - Indonesian sensation Afgansyah Reza, better known as AFGAN, makes his way back to Malaysia for his most anticipated concert. AFGAN “SIDES” Live in Malaysia 2016 will be held at Dewan Merdeka, PWTC in Kuala Lumpur on Saturday, 3th September at 8pm!


Organized by Dazzling Lifestyle, the one night only show is in support of his album SIDES, his first album in 3 years. SIDES features more mature and diverse sounds compared to his older works. In this latest offering, AFGAN sticks to his R&B roots but fuses elements of blues, electronic and orchestra, where he gets to do more than love songs and uncover different parts of himself.
To spice up the night, Malaysian rising star SonaOne will be performing as guest artiste. This will be the first time for the rapper, who has worked on the album SIDES, to share the same stage with AFGAN.
Tickets for AFGAN “SIDES” Live in Malaysia 2016 priced at RM188 (Bronze), RM288 (Silver), RM388 (Gold), RM488 (Platinum), RM588 (Diamond), and RM788 (Diamond VIP Meet & Greet Package) are selling fast. Tickets are available via TicketCharge online at www.ticketcharge.com.my or call +603 9222 8811, except for Diamond VIP Meet & Greet Package, which is only available by calling +603 7982 5523. The Diamond VIP Meet & Greet Package comes with a concert ticket, a soundcheck pass, a photo opportunity with AFGAN, an autographed album and a concert poster. All ticket prices are inclusive of 6% GST and RM4 processing fee.
Known for his vocal talent in songs like Katakan Tidak, Jodoh Pasti Bertemu, Terima Kasih Cinta, Bukan Cinta Biasa, and Knock Me Out, AFGAN’s presence on screen is also noticeable. He attained one of the seats of the judging panel on the second season of X Factor Indonesia, replacing singer Anggun. In Indonesian films, aside landing the lead role in Cinta 2 Hati and Refrain, he is one of the directors of Gila, in which he directed a musical scene.
With 1.5 million followers on Instagram, Afganisme, what his fans are called, doesn’t necessarily come from his homeland but as well as Brunei, Singapore and of course Malaysia. To date, he has released an EP and 4 albums, with SIDES being the latest one, and have collaborated with names like Bebi Romeo, Rossa, Raissa and Taufik Batisah. For SIDES, AFGAN worked with Mark Hill from the United Kingdom, who has produced for Craig David and Ed Sheeran.
Throughout the years, AFGAN received 5 awards out of 19 nominations at the Anugerah Musik Indonesia (AMI). Out of Indonesia, AFGAN won the World Music Awards for World's Best Indonesian Male Artist, Asia Song Festival for Best Asian Artist and World International Property Organization (WIPO) for his creativity in music. He was once nominated at Anugerah Industri Muzik (AIM), Malaysia’s equivalent to the Grammys.
The concert is organized by Dazzling Lifestyle and presented by Obermain, Trinity Optima Production as the Artiste Management; Suria Records Sdn Bhd as Recording Label; Astro Circle as Official Loyalty Partner; Sinar FM as Official Radio Station; E&O Residences Kuala Lumpur as Official Hotel; Red Box and Green Box as Promo Partners; TicketCharge as Ticketing Agent and Sega Irama as Technical Support.
For further news and updates, visit Dazzling Lifestyle at : https://www.facebook.com/DazzlingLifestyle.my or dazzling_lifestyle (https://www.instagram.com/dazzling_lifestyle) on Instagram. 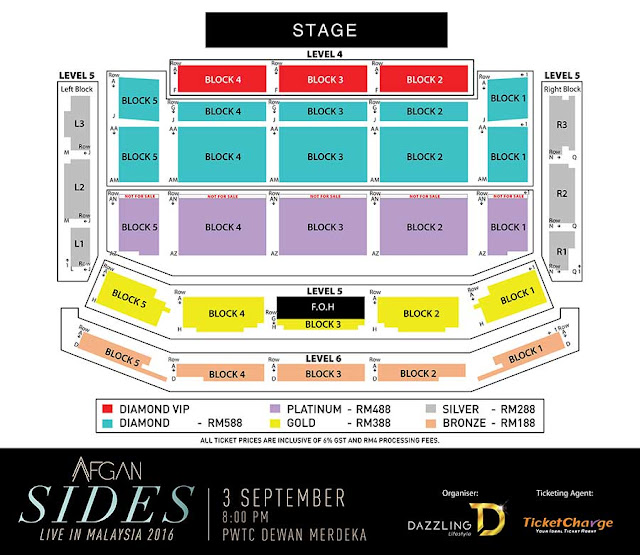