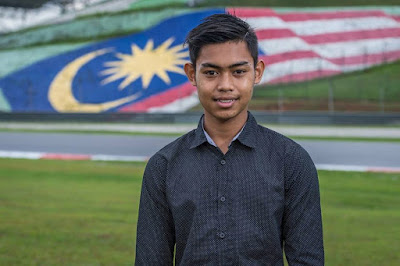 Jerez, Spain – Sunday 14th February 2016
Circuit: Circuito de Jerez, Spain
Circuit Length: 4.4 km
DRIVE M7 SIC Racing Team rider Adam Norrodin has already made a good impression on Team Manager Johan Stigefelt, following his first test on board the Honda NSF250RW.
Throughout the two-day private test at the Circuit de la Comunitat Valenciana Ricardo Tormo, the Moto3 rookie immediately impressed with his professional attitude and ability to adapt to his new surroundings.
Making the step up from the Asia Talent Cup, 17-year-old Norrodin has a steep learning curve ahead, as he embarks on the transition into the World Championship class for 2016.
Following a further two days on track at Jerez scheduled for today [Sunday 14th] and Monday 15th February, the Malaysian newcomer will make his official Moto3 debut in just five weeks’ time, at the opening round on Sunday 20th March in Qatar.
Johan Stigefelt – Team Manager
“It’s exciting to work with Adam. He’s young and has the hunger for success. He wants to learn and we want to teach him. It is our job to make him a better rider and give him the best experience and support throughout this new step in his career. We want him to do well from the start.
I could already see in Valencia after the first test that Adam has a lot of talent; he is a hard worker, he listens to his crew and works well with his teammate Jakub; these are key points. The biggest thing is that he wants this and believes in himself and you can really see this. He has a lot of confidence even though he is only seventeen and hasn’t ridden at this level before. He has a fantastic bike with the Factory Honda, the best in the class and he has a good team with a lot of experience surrounding him. The speed is there, the bike is there and the structure is there, so we’re looking forward. Of course it’s going to be a tough year for him but I’m feeling positive about it. I really believe he can do well and fulfill his target.”

#7 Adam Norrodin
“I’m really happy to be riding for the DRIVE M7 SIC Racing Team in Moto3 and I’d like to thank Razlan Razali and all at Sepang International Circuit for this opportunity. It’s a big step for me but I’m excited about it. The team are all really friendly and already I feel comfortable with them. I have a lot of learning to do this year as everything is new; bike, team, championship and also many of the tracks I have not ridden at before, but I’m feeling positive about the season ahead. My aim for this year is to learn as much as possible and build my confidence within the class.”
-SIC Racing Team facebook.
PelanconganKini supports DRIVE M7 SIC Racing Team.
Note: DRIVE M7 merchandises are available at http://www.m7shop.com/home.aspx
M7 Energy Drink (European Version) also now available.
Posted by PelanconganKini at 2/15/2016 12:33:00 am