Malaysia Stands Between Hope And Reality 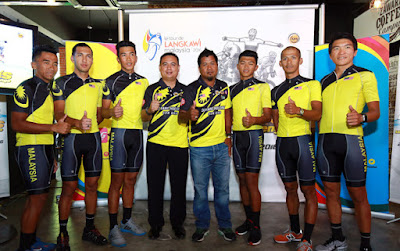 SHAH ALAM : The Malaysian national team won't be short of experience when they line up for the 21st edition of Le Tour de Langkawi (LTdL) on February 24.

Led by the likes of veterans Mohd Fauzan Ahmad Lutfi, Amir Mustafa Rusli and Loh Sea Keong, the squad includes Nik Mohd Azwan Zulkifle, along with youngsters Muhd Nur Aiman Zarif, 19, and Mohd Azri Ahmad, 21, who will be making their debut in the race.

Representing the Malaysian National Cycling Federation (MNCF) the team holds the distinction of being the only one to have started every edition of LTdL since its inception in 1996 and team manager Ezral Ezwani Abdul Malik believes the team will carry the right elements into the race this time around.

"Of course, realistically we cannot be setting lofty targets like victories. But the squad has the right blend for the national team to build on from here. We have the experienced riders like Fauzan, Amir and Sea Keong, but we are also carrying out our responsibility to blood the youngsters like Nur Aiman and Azri by giving them this opportunity," said Ezral.

"While the seniors will know what to do in the race and can strategise on what they want to aim for during the race. For a 19-year old like Nur Aiman, this will be invaluable experience. We will be aiming for respectable finishes in all stages and who knows, we might even pack a surprise or two along the way."
Fauzan is a former national champion, while Amir Mustafa is part of the national track endurance programme.

The 30-year old Sea Keong is the most successful road cyclist in Malaysia's history, having had an illustrious career that includes an overall victory in the Jelajah Malaysia in 2013 and in the following year he became the first Malaysian to don the colours of a UCI Pro Team when he joined the Giant-Shimano team.
Malaysia's best ever result in LTdL was a victory in the overall Asian Teams classification, which they achieved in 1999.