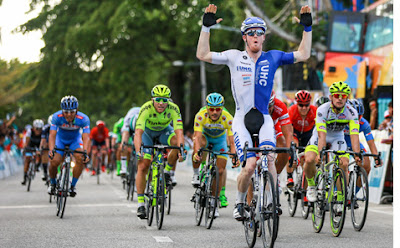 KUALA KANGSAR - American cyclist John Murphy fended off the Italian sprinters on stage 3 of the 21st Le Tour de Langkawi as he proved himself faster and smarter than Francesco Chicchi, Jakub Mareczko and Andrea Guardini. The latter retained the yellow jersey of race leader ahead of the queen stage to the Cameron Highlands.

A leading trio opened the road for 100 out of 107km of racing from Kulim to Kuala Kangsar, formed of Donaben Goh (Terengganu), James Oram (One Pro Cycling) and Joao Pereira (Funvic-Soul-Carrefour). They reached a maximum lead of 3.40 after 29km. Oram was impressive as forged on in the finale with Goh on his wheel but the pair got reined in 2km before the finish.

The key of the sprint was a position on the right side of the road due some wind blowing from the left. Murphy was at the right place and claimed his first ever stage victory at Le Tour de Langkawi after beating last year’s young star Caleb Ewan in the conclusive stage of the Herald Sun Tour earlier this month in Australia.

“The Unitedhealthcare Pro Cycling team was phenomenal today”, Murphy emphasized. “The guys did an awesome job keeping me in pole position all day, keeping me hydrated in the heat, giving me mars bars… I was in a really good position in the last corner. I had a great lead out. It was a drag race, that’s what I like. It’s a wonderful finish for me and my team. I’m very happy to win here in Malaysia. I’m having an amazing time. It’s a beautiful country and we’ll keep on racing till the end.”

Guardini was happy to keep the yellow jersey but surprisingly, rather than expressing his disappointment, he was full of praise for the day’s winner. “In Unitedhealthcare, we’ve now found a team that can pull with us”, the Italian said. “They do a really good job for their sprinter. I quickly understood how difficult it would be to win the sprint when I launched mine. I started and stayed in the same position I was in.”

Chicchi and Mareczko looked more affected by the defeat. “I’m disappointed”, Chicchi commented. “I’ve had to launched from a bit too far out. Unitedhealthcare did a perfect job. They went to the right, protected by the barriers while I was in the middle of the road going slightly uphill and exposed to the side wind. I have lost because of my too strong desire to win.”

“I was in fourth position at the last curve then I got a bit lost in the sprint”, Mareczko described. “I recovered some positions and managed to pass Guardini but I couldn’t get better than third.”

Guardini and Murphy made themselves available for helping their respective Colombian team-mate in stage 4 from Ipoh to the Cameron Highlands. Miguel Angel Lopez will become Astana’s leader while Unitedhealthcare has more than one card to play with Colombia’s Daniel Jaramillo but also Janez Brajkovic and Johnny Clarke.
-www.ltdl.com.my
Posted by PelanconganKini at 2/26/2016 11:45:00 pm