Guardini Makes It Twenty At Most Prestigious Stage Finish Location 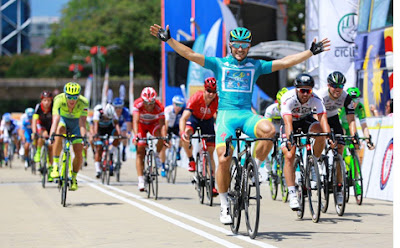 KUALA LUMPUR - Andrea Guardini became the first rider to reach the number of 20 stage victories at Le Tour de Langkawi – out of 37 in total in his six-year long pro career at the age of 26 – as he claimed the sprinters’ queen stage at Dataran Merdeka, Kuala Lumpur, making it four out of four on the race’s most prestigious venue. Coming third while stage 2 winner Andrea Palini finished second, South Africa’s Reinardt Janse van Rensburg who is second overall to Colombia’s Miguel Angel Lopez diminished his deficit from 29 to 23 seconds with three stages remaining.

It took 63 kilometres for the breakaway of the day to take shape. Beforehand, Guardini had to go for the first intermediate sprint against Janse van Rensburg to protect the overall lead of his team-mate Lopez. The Dimension Data fast man took two seconds there but sustained a flat tyre 2km before the second intermediate sprint, so Guardini could give way to the riders fighting for fifth place overall. Bardiani’s Luca Chirico and Jesper Hansen captured three and two seconds bonus respectively. Then it was time for breaking away.

Racing for the King of the Mountains competition, Wang Meiyin (Hengxiang) rode on the offensive again, and once again with Loh Sea Keong who was accompanied by another rider from Malaysia national team Aiman. Amirul Mazuki (Terengganu) and Kim Hyeonseok (KSPO) were the other members of the move before Carlos Manarelli (Funvic) rejoined them to compose a six-man front group. They had a maximum advantage of 3.20 at km 77.

In the finale, John Ebsen and Richard Handley, both from One Pro Cycling, came across to the two remaining leaders Loh and Amirul. They got reined in nearby the famous twin towers of Kuala Lumpur.

The inevitable bunch sprint was easily won by Guardini. “It’s a wonderful day for me and a perfect fourth win here on my favourite finishing line of Le Tour de Langkawi”, the Italian declared. “Every time I come to Kuala Lumpur, I win, it’s fantastic. With 20km to go, my mind was all set on this finish location. I could feel a lot of adrenaline in the run in. I knew exactly where I needed to pass my adversaries to outsprint them. We took control of the race and I had a really good sprint.”

“It was a very fast stage again”, Superman Lopez – his nickname – commented. “I’ve lost a little bit of time on GC but we caught the breakaway riders by profiting from the work of the other teams too. I’m happy to retain the yellow jersey and to realize that the flag of [the Federal Territory of] Kuala Lumpur is exactly the same as Colombia’s at the exception of the heraldry in the middle. I feel much welcome in Malaysia.”

Malaysia’s Adiq Hussainie Othman also retained the lead of the best Asian rider classification. “I was a bit nervous in the race today with [Masakazu] Ito and Zhao Jingbiao only at six and seven seconds”, the Terengganu rider from Dungun explained. “I had a big problem with my bicycle so I got it changed after 80km and it went well till the end.

Tomorrow it’s the most complicated day to defend the white jersey but I’ve reckoned the course at training and it should be no problem as long as there’s no technical issue. It was emotionally fabulous to hear people shouting my name loud on the road sides today. It felt like Adiq was everywhere!”

At the finishing line, Youth and Sport Minister YB Khairy Jamaluddin emphasized the great popular success of LTdL this year. Stage 6 will be held from Putrajaya, the home of the Malaysian government, to Rembau (147km) on a lumpy terrain likely to make the race very interesting.
-www.ltdl.com.my
Posted by PelanconganKini at 2/29/2016 12:26:00 am