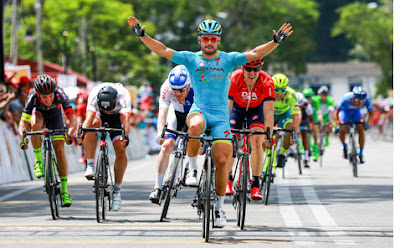 BALING - Italy’s Andrea Guardini of Astana fended off new opponents at Le Tour de Langkawi to claim his nineteenth stage victory in six straight participations to the Malaysian race as he won stage 1 in Baling in a much expected bunch gallop. As they discovered the event for the first time, Australia’s Brenton Jones from Drapac and Skydive Dubai’s Andrea Palini who also hails from Italy came second and third respectively.

Like in 2011 and 20115, Guardini will start stage 2 in the yellow jersey but with an advantage of only two seconds over China’s Wang Meiyin who was the other top contender of the day. The versatile rider from Hengxiang who is well known in Malaysia after he finished fifth overall in 2013, having won the Cameron Highlands stage and the King of the Mountains price that year, firstly bridged the gap to the initial three attackers Adiq Hussainie Othman (Terengganu), Loh Sea Keong (Malaysia national team) and Meher Hasnaoui (Skydive Dubai).

Wang won the first two intermediate sprints at km 22 and 56 ahead of Othman who managed to claim the third one to secure the third place in the overall classification through the time bonuses. Wang also outsprinted his three breakaway companions at the mountains prices.

The maximum advantage of the leading quartet was 6.50 at km 50. Once the TV live coverage was on, the Malaysian audience enjoyed Loh’s fighting spirit as the Kelantanese from Kuala Krai forged on in a brilliant solo effort before he was the last rider to get caught by the peloton in the last ten kilometers of racing. The head wind in the final stretch was a key factor for Guardini to show that his sprinting abilities remain intact.

“It’s always hard to win, especially when being the hot favourite”, Guardini declared in the post-race press conference. “In stage 1, it’s also difficult to take control of the events. Everyone was waiting for my team to do it. Fortunately, Southeast collaborated with us to catch the breakaway. There were good riders at the front but a lot of head wind at the end. As a team, we’ve done a good job but we’ve also lost one rider [Ruslan Tleubayev] who broke a collarbone in a crash. It’s nice to have the jersey but it’ll be even more difficult to control the race with one rider less.”

The Astana sprinter dedicated his victory to a new born baby after he spoke to his wife on the phone prior to the start. “For the first time I became an uncle last night so this win is for Robin, my niece”, he said. “Le Tour de Langkawi isn’t a race like last year for me. I find some rivals who are new to me. I’ve already taken part in a lot of races [Dubai Tour, Tour of Qatar and Tour of Oman] before coming here but I hope to keep a good condition from now until the last stage.”

Wang expressed the same wish, even though it was a surprise to a few observers to see him on the attack so early in Le Tour de Langkawi rather than waiting for the expected to be decisive stage 4 to the Cameron Highlands. “I thank my team for having given me the opportunity to try and go for the sprints and the KOM points”, said the 27 year old from Qufu in the Shandong province. “I also thank the organizers for inviting us once again. Le Tour de Langkawi is a platform for Chinese cyclists on the international cycling scene.”