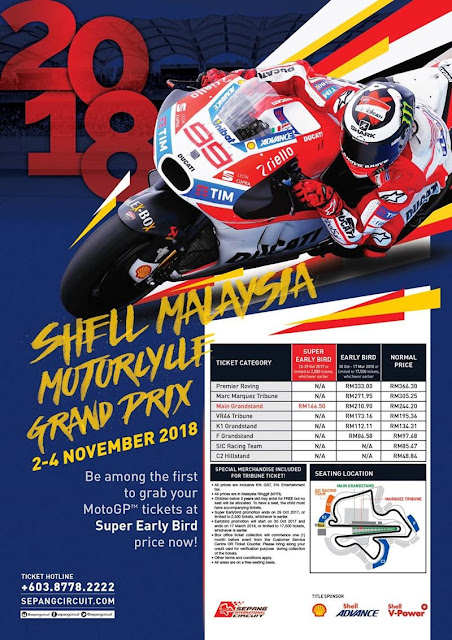 KUALA LUMPUR, October 12, 2017 – The dust just barely settled for the final 2017 Formula 1 Petronas Malaysia Grand Prix at the Sepang International Circuit (SIC) but that by no means all is done for the year.

Things are just about to get hot again at SIC as Malaysia prepare to host the penultimate round of the 2017 MotoGP World Championship from 27 to 29 October. In an unprecedented strategy, SIC today announced and launched ticket prices  for 2018 Malaysia MotoGP before the event takes place. This is a first in 27 years in organising MotoGP since 1991.

Starting from today (12 October) until race day on 29 October, fans will have the opportunity to purchase Main Grandstand tickets for the SHELL MALAYSIA MOTORCYCLE GRAND PRIX 2018 with the Super Early Bird Promotion.

The SHELL MALAYSIA MOTORCYCLE GRAND PRIX 2018 will be held from 2 to 4 November 2018, with a week gap after the Australian round.

SIC Chief Executive Officer, Dato' Razlan Razali said “We are pleased to announce the Super Early Bird Promotion for next year's event. This is to enable fans to get their tickets early and thus avoid any risk of missing the event next year. This year will be another sell-out event expecting over 160,000 spectators over three days. We are excited to see the massive crowd that will gather at SIC this year to catch the thrilling actions on track and support our Malaysian boys for the race. We understand that local fans of Malaysia MotoGP are highly emotional and price sensitive. Therefore, SIC is offering super early bird promotion based on 2017 ticket prices.

“We have decided to announce next year’s ticket early as to ensure that fans can book their dates and travel plans for next year earlier to avoid the hassle of buying at last minute. Although the tickets have increased for 2018, fans who purchased Main Grandstand tickets during the Super Early Bird promotion stand to buy their tickets at this year's early bird promotional price.”

Ticket categories remain the same for 2018 with the Main Grandstand, K1 Grandstand, F Grandstand, SIC Racing Team Tribune, VR46 Tribune, Marc Marquez Tribune, C2 Hillstand and the Premier Roving. But SIC plans to introduce more riders or team tribunes similar to the current which may be launched starting next year.

On another note, although tickets for Shell Malaysia Motorcycle Grand Prix 2017 have sold out, SIC is working closely with Shell Malaysia and have launched a new seating area this year to accommodate the increasing demand­ – the Shell Hillstand which is an exclusive area with great view of Turn 13 and 14. For RM60, ticket holders will get a survival kit, the privilege of access to trading booths at the Mall area, picnic area and a host of exciting games and activities throughout the day.

C2 Hillstand tickets (at RM44.25) are also available with limited quantities or fans can opt to watch the race in style in the opulence of the MotoGP VIP Village (at RM5,280 each).

“We are targeting over 95,000 for Sunday race day. We welcomed 161,553 people for the race last year and we are confident to breach the figures this year.

“With three Malaysian riders in the world championships this year, I expect another bumper crowd to fill the stands on race day.”


Note:
Super Early Bird promotion ends 29 Oct 2017, or limited to 2,500 tickets, whichever is earlier. Tickets can be purchased via:
1. www.sepangcircuit.com
2. Ticket hotline 03-8778 2222 or
3. Walk-in to SIC. Those attending 2017 MotoGP may buy this Super Early Bird tickets at the Ticket Counter @ PX area.
4. Shell Hillstand tickets can be purchased at 122 participating Shell Stations. List of the Shell Stations is available on http://www.shell.com.my/motogp2017 .