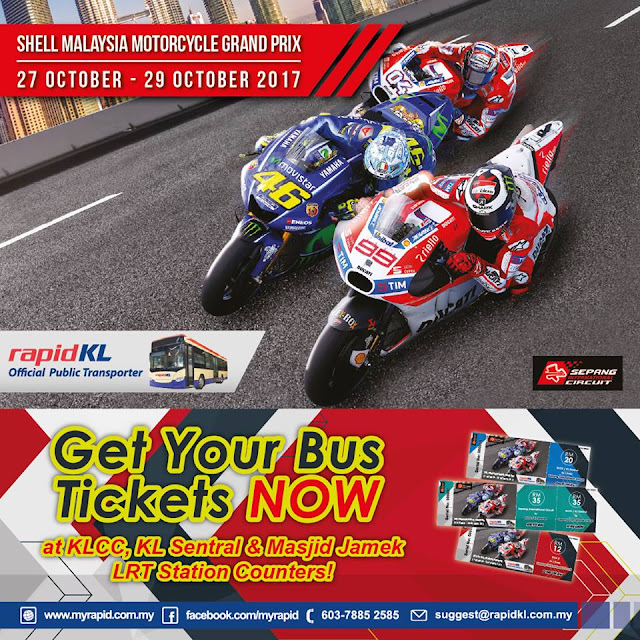 KUALA LUMPUR, 23 October – For the fourth consecutive year, Rapid KL will be providing the special shuttle service from the city and KLIA for fans to enjoy the Shell Malaysian Motorcycle Grand Prix, which will be held in Sepang from October 27 to 29.
Ensuring convenience for the fans, the bus tickets are already on sale at key LRT stations for the service, which will commence from Friday (27 October) to Sunday on October 29.
“Fans can already purchase the tickets at KLCC, Masjid Jamek and KL Sentral LRT stations so that fans can conveniently board the bus and head for Sepang. They can also be purchased at KLIA2 Transportation Hub at Level 1. We all know that tickets for the race had been selling like hot cakes and we expect many of them will be taking our services.
“Based on the last few years, Rapid KL bus services as the Official Public Transporter for the Malaysian Motorcycle Grand Prix have been hugely popular. Hence, it is good to get the bus tickets now rather than during the event and needing to queue,” Rapid Bus Chief Executive Officer, Encik Mohd Azam Omar said in a statement today.
The MotoGP shuttle bus will serve express service between KLCC and KL Sentral in the city and SIC; and between KLIA2 and the circuit. These locations are selected as they provide the best convenience travel for fans. 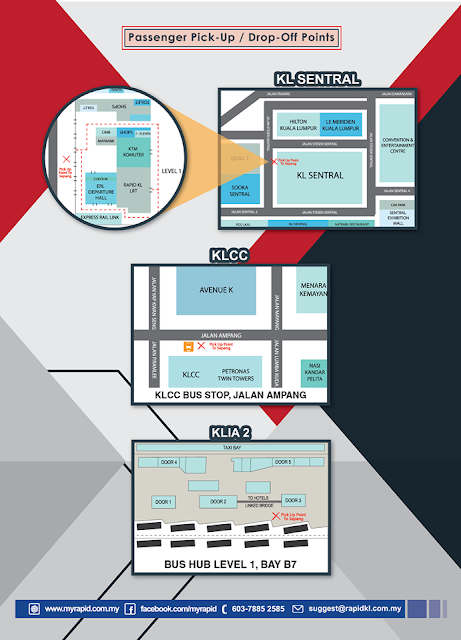 While KLCC is easily accessible to city folks with its connectivity with Rapid KL’s LRT Kelana Jaya Line and the Go KL bus hub, KL Sentral is the national public transport hub which is connected to the ERL and KLIA Ekspres services, KTM Komuter and the ETS, KL Monorail services as well as Rapid KL’s LRT Kelana Jaya Line.
Ticket prices for travel between KL Sentral and KLCC, and SIC are RM20 per trip and RM38 for return trips.
The choice of KLIA2 is to support fans coming on domestic and international flights on the low-cost carrier. Bus ticket price is RM12 per trip.
“From October 27 and for throughout the three event days, the bus tickets can only be purchased at the departure points at KL Sentral, KLCC and KLIA2,” he said, adding that the departure point for KL Sentral is at Level 1 near the ERL Arrival Hall; and at the Go KL bus stop at Jalan Ampang.
For KLIA2, the departure point will be at Bay 87, the Bus Hub at Level 1 of the low-cost carrier airport terminal.
For buses from the city, bus frequency will be about 30 minutes; with the first bus leaving from the city to SIC at 8am and ending at 12 noon. The first bus from KLIA2 will be from 8am as well and ending at 12 noon for all three days.
For the return trips, the first bus will be leaving the circuit at 4pm; with the last bus scheduled at 7pm for all three days.
“My advice, however, is for fans to go early to the circuit. There is the Mega MotoGP Carnival where there will be plenty of fun activities, shopping and excitement for fans to enjoy apart from the world class races. There’s also the Asia Talent Cup where local hero Azroy Anuar has the opportunity to become Malaysia’s first overall champion in this prestigious series,” Azam added.
Apart from the three-day Mega MotoGP Carnival at the Mall Area, other off-track activities include the Riders Autograph Session and the Public Pit Lane Walk on Friday; the Riders Fan Forum and the Safety Car Ride on Saturday; and the Track Stunt Show and the Grid Walk on Sunday.
-Rapid KL facebook.
Posted by PelanconganKini at 10/23/2017 11:36:00 pm