Palini VS Guardini: The Andreas Share The Honours In Penang 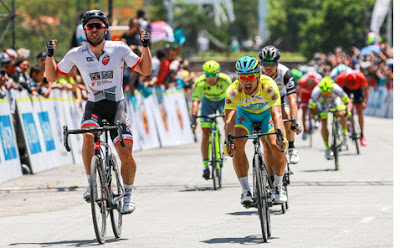 GEORGETOWN, PENANG - Andrea Palini of Skydive Dubai outsprinted Astana’s Andrea Guardini on the finishing line in Georgetown on the occasion of an unprecedented stage finishing in Penang via the 24km long second bridge and the 5km long Teluk Bahang hill.

China’s Wang Meiyin missed out on taking the yellow jersey from Guardini after another breakaway that saw him accumulating points for the King of the Mountains and the points classification he now leads.

After 22km of racing, the Hengxiang versatile rider found the way to escape along with Loh Sea Keong (Malaysia national team), Sofian Nabil (NSC), Gong Hyo Suk (KSPO) and Jamilidin Navardianto (Pegasus). They got a maximum advantage of 4.15 at km 50. As Wang won all three intermediate sprints, he collected nine seconds of time bonus, which put him in a virtual position of race leader with the perspective of taking the yellow jersey, shall Guardini not be the stage winner.

Astana pulled the bunch but didn’t catch the remaining three breakaway riders, Wang, Loh and Nabil, before the summit of Teluk Bahang with 30km to go. It was eventually all together 11km before the end of the race. All elements that make a good bike race were combined in one day as the wind played a key role in the finale after the climbs and the Penang bridge in a very spectacular environment.

“I didn’t expect to win”, Palini explained in a post-race press conference. “I was hoping for scoring points but I didn’t think I could beat Guardini. However, I was fresher than him after the last climb. That made the difference. I’m very happy. To win here is very important. It already makes my Tour de Langkawi a successful one.”

Guardini caught the occasion to underline how difficult it is to win a race, even for a sprinter of his caliber. “I said this morning again that it’s never simple to win”, he commented. “Palini showed today that he’s a more complete rider than me. He passed the hill better than me. I rode flat out to stay with the main peloton and it took out of me the energy I needed for winning the bunch sprint.”

It was a tight finish though. Bardiani-CSF’s Nicola Ruffoni crashed behind the leading trio of sprinters, South Africa’s Reinardt Janse van Rensburg being third on the line. The fast finale prevented Wang from getting the same time as Palini, so he missed out on the yellow jersey. “But my main goal is the King of Mountains jersey”, the Chinese rider explained. “That’s why I rode away again.”

Malaysia’s Loh Sea Keong was awarded the price of most combative rider as he also took part in the breakaway for the second straight day. “My career was in a dilemma after I finished the Tour de Korea in June”, the Kelantanese explained. “I was struggling with a lot of things in my life. I decided to take a break from cycling but in November, I went to Thailand to train for making a come-back. Here I am, happy to race offensively for Malaysia again. Today it was the most valuable stage I’ve experienced in ten years of taking part in Le Tour de Langkawi. Riding in to Penang was incredibly spectacular, so was the run in to the finish when we came down to the coast from the last hill. It was a challenging route. I was thrilled to be part of the breakaway until very close to the finish.”

Malaysia’s Minister of Youth and Sport YB Khairy Jamaluddin was in attendance. A dedicated cyclist himself, he enjoyed what will remain a memorable stage in the 20-year long history of Le Tour de Langkawi.
-www.ltdl.com.my
Posted by PelanconganKini at 2/25/2016 06:07:00 pm