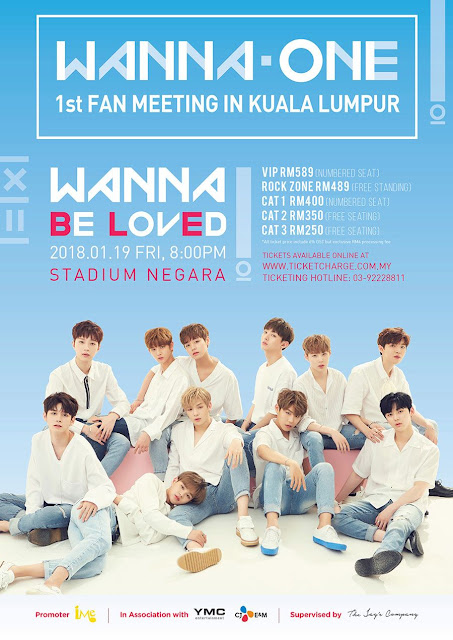 Survived from an extremely fierce survival reality show, Produce 101 Season 2 and currently one of the hottest and biggest rookies in Korea, Wanna One is finally coming to Malaysia for their first fan meeting.

Wanna One is a group created through one of the biggest survival reality programs (Produce 101 Season 2) in South Korea. These 11 members of Wanna One were picked by the ‘national producers’ (public) out of the 101 contestants from 54 entertainment companies who competed in the show. Wanna One has taken over Korea by storm right after their debut in August and currently has amassed attention and love calls not only from fans but media domestically as well as internationally. They released their debut album 1X1=1, TO BE ONE on 7th August and their title song “Energetic” swept various major music charts such as Melon, Genie, Bugs, Mnet, Naver, Soribada immediately after the release of the album.

Besides that, Wanna One explosive popularity can be seen when the tickets for their first concert “Wanna One Premier Show-Con” were sold out within minutes, crashing the site of the ticket server. The group has also proved their outstanding achievement when they grabbed two awards, “New Korean Wave Rookie Award” and “New Korean Wave Rising Hot Star Award”at 1st Soribada Best K-Music Awards just a month after their debut.

Ticket launch will be held on 5th November (Sunday) from 11A.M. to 3P.M. at Empire City, PJ (LG2, Concourse Area). 1 person can purchase 6 tickets maximum. Fans that attend and purchase tickets during the ticket launch will be given exclusive postcard (One post card per ticket and due to limited amount, it will be on first come first serve basis).

Online ticketing will be commenced on same day from 4P.M. through TicketCharge website (www.ticketcharge.com.my).


The lucky winners will be choose based on lucky draw basis through ticket barcode (13 digits) on the concert ticket. We will announce the lucky winners’ list on our social media platforms.

So, are you ready TO BE ONE with Wanna One? Get ready to catch these 11 ENERGETIC and charming boys live in Malaysia soon! Wanna One 1st Fan Meeting in Kuala Lumpur ‘Wanna Be Loved”, a show that you will NEVER want to miss out.