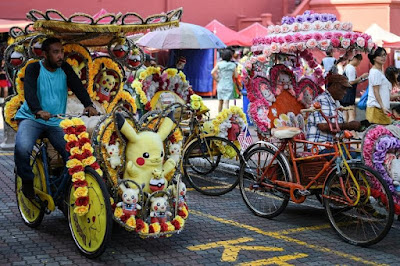 MELAKA, Nov 3 ― Decked out with flashing lights and cartoon characters, with loud music pumping, rickety bicycle rickshaws have become a hit with tourists visiting the historic Malaysian city of Melaka.

Once a common sight in many parts of Malaysia, the three-wheelers, known locally as trishaws, were largely phased out as cars became more affordable and took over the country’s roads.

But in Melaka, a former colonial settlement that is a Unesco World Heritage site and one of Malaysia’s top tourist draws, the pedal-powered vehicles live on.

They have adapted to the modern era in a bid to appeal to tourists, adding figures of cartoon characters such as Hello Kitty and Pokemon’s Pikachu and blinking fairy lights that are turned on at night.

Their sound systems blare out an eclectic mix of music, from techno to Bollywood hits and Chinese ballads.

“Malacca’s trishaws are unique for their decorations ― other trishaws, they don’t come close,” said driver Mohamad Isa Mursidi, whose three-wheeled steed was decorated with Hello Kitty dolls and a bouquet of plastic flowers in a heart-shaped frame.

When they are not ferrying visitors around Melaka, the rickshaws can usually be found hanging around the historic central square in the shadow of the Stadthuys, an imposing red building that was the governor’s office during Dutch colonial rule.

A 30-minute ride on a selected route around some of the city’s historic buildings costs around RM25.

The noisy, garish trishaws may not be to the taste of everyone visiting the ancient city.

But for many heading to Melaka, a trip in one of the colourful rickshaws is all part of the experience.

“It gives a romantic feeling to the heart at night,” said local tourist Ganapathy Kuppusamy.

Melaka, on peninsular Malaysia’s southwest cost, has a history dating back to around the 15th century. With a strategic location on the Straits of Malacca, it became a wealthy entrepot and attracted traders from around the world.

It was colonised first by the Portuguese, later by the Dutch and finally by the British in the 19th century, when it became part of the Straits Settlements with Penang, in modern-day Malaysia, and Singapore.
-AFP/MalayMail.
Posted by PelanconganKini at 11/03/2017 04:36:00 pm