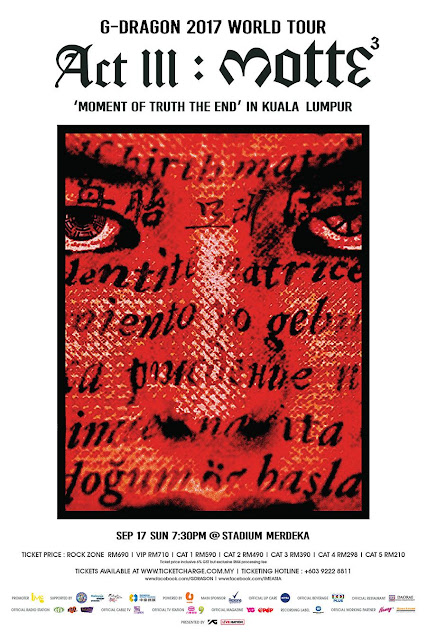 G-DRAGON has included Malaysia in his

With 6 years of training in YG Entertainment, G-DRAGON debuted in the year 2006 with his members in BIGBANG. 3 years later, G-DRAGON debuted as a soloist and resulting a huge amount of success by winning various awards throughout the years. The talented idol has written over 23 hit songs including for his band; Loser, Lies, Bang Bang Bang and much more. His first ever EP won him a Record of the Year at the 22nd Seoul Music Awards. The EP broke his previous record, Heartbreaker, for being the highest-selling album.

G-DRAGON is also the first Korean soloist to hold a dome tour for his first worldwide tour in the year 2013. He does not only excel in talents but also in fashion. The soloist is famously known for his unique and charming ways of dressing up. He has worked with multiple designers even becoming a brand ambassador for Chanel in Korea. The artist has been flattered and attended fashion shows.

A limited giant concert poster will give away for ticket purchaser on the spot (1 ticket can redeem 1 poster, first come first serve). Online purchase will open on same day start from 4pm through TicketCharge website (www.ticketcharge.com.my).

FAN BENEFIT: Fan’s who purchase rock zone or VIP ticket stand a chance to win sound check passes by lucky draw based on your ticket barcode.