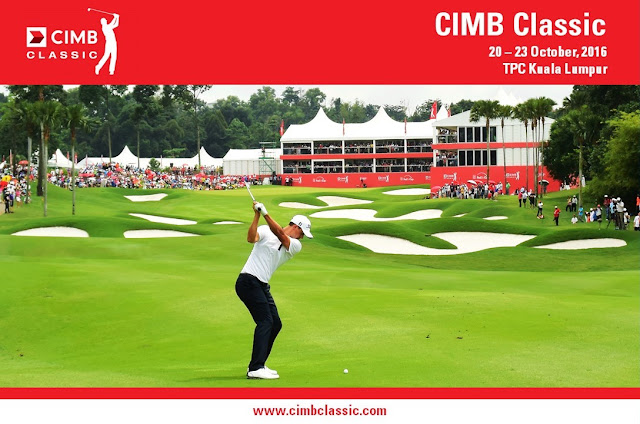 [KUALA LUMPUR] 3 October 2016 - CIMB Group today announced the final PGA TOUR field for the CIMB Classic, set to tee-off at TPC Kuala Lumpur from 20 - 23 October 2016.
Green, Leong and Khor, who posted a 73, 72 and 71 respectively, are the only players in the red on three-under-par 141 as they head into the final 18 holes at the TPC Kuala Lumpur, West Course.
The 67 players committed to the CIMB Classic so far have a combined 156 PGA TOUR victories, led by World Golf Hall of Fame members Vijay Singh, who owns 34 career wins including three majors, and Ernie Els, who has 19 wins including four majors. Joining those two legends of the game is Australian superstar Adam Scott, who has 13 PGA TOUR victories and one major himself, and is coming off of a runner-up finish at last year’s CIMB Classic.
Twenty-one of those players who have committed to the CIMB Classic won on the PGA TOUR during the 2015-16 season, highlighted by defending champion Justin Thomas. Joining him is two-time CIMB Classic champion Ryan Moore, who won his fifth PGA TOUR Title at the John Deere Classic in August. Moore, who won the CIMB Classic in 2013 and 2014, lost to Rory McIlroy in a playoff at the season-ending TOUR Championship last week, ultimately finishing seventh in the FedExCup. American Kevin Chappell was also in a three-man playoff at the TOUR Championship and is committed to play next month at TPC Kuala Lumpur.
“Each year, the CIMB Classic plays host to a stellar cast of some of the world’s best in golf, from the latest top-ranked players, to champions past and present,” said Tengku Dato’ Sri Zafrul Aziz, Group Chief Executive, CIMB Group. “This year’s listing features nine of the top-13 of the final FedExCup rankings, one of the best line-ups in our tournament history. We are extremely excited, and fans can definitely look forward to a great show in three weeks’ time.”R
The top finishers in the FedExCup committed to the CIMB Classic are Patrick Reed (3), Adam Scott (4), Paul Casey (5), Ryan Moore (7), Russell Knox (10), Emiliano Grillo (11), Justin Thomas (12), Hideki Matsuyama (13), Si Woo Kim (17), Gary Woodland (20), Kevin Kisner (23), Daniel Berger (26), Sean O’Hair (27), Kevin Na (28) and Jhonattan Vegas (29).
American Patrick Reed had a remarkable season, recording 11 top 10s in 28 starts, including a win at The Barclays at Bethpage Black on Long Island, New York. Reed is one of four players in the field who competed at last week's Ryder Cup at Hazeltine National Golf Club, joining U.S. Team member Ryan Moore and European Team members Sergio Garcia and Rafa Cabrera-Bello. Reed beat Rory McIlroy 1-up in their singles match on Sunday, improving his record to 6-1-2 and setting the pace for a dominating U.S. team in the final round. Captain’s Pick and debutant Moore defeated Lee Westwood, sealing victory and regaining the Ryder Cup for team U.S., who eventually finished 17-11.
Russell Knox of Scotland will be playing in his second CIMB Classic and joins Adam Scott as the only multiple winners on the PGA TOUR in 2015-16 in the field. Knox won The World Golf Championships-HSBC Champions the week after last year’s CIMB Classic and added the Travelers Championship in August. Scott was able to win in back-to-back weeks last season, winning The Honda Classic and the World Golf Championships-Cadillac Championship.
Gavin Green, who represented Malaysia in the Olympics in Rio in August, defeated Ben Leong in the SapuraKencana National Classic at TPC Kuala Lumpur last week to secure a spot in the CIMB Classic. Green, 22, was a three-time All-American at the University of New Mexico and is playing in the Web.com Q-School before making his first PGA TOUR start at the Safeway Open in Napa, California.
11 more players will be added to the field between now and the tournament, 10 given to the top players on the Asian Tour Order of Merit as of 17 October and one to the Malaysian with the highest Official World Golf Ranking as of 11 October.
-www.cimbclassic.com
Posted by PelanconganKini at 10/05/2016 09:13:00 pm