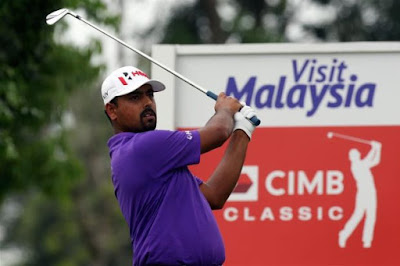 KUALA LUMPUR: When Anirban Lahiri was asked at the CIMB Classic’s pre-tournament press conference on Wednesday on how far away he was to winning a maiden US PGA Tour title, he replied: “Hopefully four days!”


Now, it looks like the Indian’s dream is set to come true.
The 29-year-old continued his scintillating form by firing a seven-under 65 to claim a four-shot lead over defending champion American Justin Thomas and Scotland’s Russell Knox after the third round of the CIMB Classic at the TPC Kuala Lumpur on Saturday.
Anirban, who is in his second season on the PGA Tour, bagged nine birdies – including four of his last five holes – against a double bogey on the penultimate day to compile a 19-under 197.
Thomas, the leader of the first two rounds, left it late as he birdied his last five holes to card a 71 to keep his title-defence hopes alive. Earlier, he was four-over through 12 holes.
World No. 20 Knox marked his scorecard with four birdies and one bogey for a 68 to join Thomas in second place on 201.
Japan’s Hideki Matsuyama, who moved atop the leaderboard at one stage, was left to rue a bogey on the 18th as he slipped to joint fourth with Americans Derek Fathauer (68) and James Hahn (69) on 14-under 202.
Anirban could not hide his delight that he managed to end his round with a flourish. He bogeyed two closing holes in the first round and double bogeyed the last in the second round.
“It’s very satisfying, to finish the way I did is definitely a big positive. I was determined today to keep my focus right throughout the 18 holes. I’m happy I managed to do that,” said the two-time European Tour winner.
Despite holding a commanding lead into the final 18 holes, Anirban is taking nothing for granted.
“I don’t consider any lead safe here. You’ve seen guys shooting a 63 or 61 on this course. I shot a 62 before (in the third round of last year’s Malaysian Open. He eventually emerged champion). Justin shot a 61 (in the second round of the CIMB Classic) last year.
“I have to keep making birdies, because you can’t play defensive golf here. You just have to hang in there and maintain your focus right to the end,” said Anirban.
Thomas was glad that he bounced back strongly to stay in the mix, whilst crediting Anirban for his superb display.
“It was terrible golf for the first 13 holes. It was great to have that finish. I gave myself a chance. I hope I can ride the momentum into tomorrow’s round,” said the 23-year-old.
He added: “Anirban is playing great. It’s the best I’ve seen him play. He just made it look so simple. I didn’t realise he made nine birdies until we finished.”
Scott Piercy carded a 67 to be one shot further back in sole seventh on 203, while fellow American Keegan Bradley, the first-round co-leader, is eighth on 204 after a 68.
World No. 6 Adam Scott, last year’s runner-up, is among eight players bunched on 11-under 205 after firing a 66.
Malaysia’s Gavin Kyle Green shot his worst round – a 75 – to tumble from overnight joint 48th to tied 70th on one-over 217 in the 78-man field.
Danny Chia, the other Malaysian representative, carded a second straight 78 to remain last on 11-over 233.