Adam Norrodin Battles Into The Points At Motegi 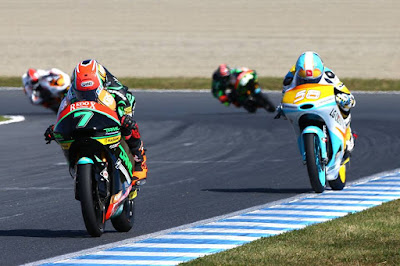 
Circuit: Twin Ring Motegi
Circuit Length: 4.8 km
The Japanese Grand Prix saw a positive end for the DRIVE M7 SIC Racing Team, with both riders finishing in the points.
Qualifying in ninth place on the grid, Moto3 rookie Adam Norrodin made an impressive start off the line immediately gaining positions and launching himself into sixth place. Caught up in the leading battle, the young Malaysian rode a smart race as he focussed on finding his rhythm and bringing the #7 machine back home in the points. Adam Norrodin concluded his solid weekend with a strong 12th place finish.
Teammate Jakub Kornfeil had a difficult task at hand starting from 21st place, but undeterred and determined to regain his fighting form, the Czech rider launched off the line and into battle as the twenty lap race got underway.
Despite gaining positions Kornfeil was forced to take evasive action when a crash on lap one unfolded before him. With no other choice but to run off track, the 23-year-old re-joined the race in last place. Working his way back through the field, Jakub Kornfeil rode relentlessly to cross the line in an admirable 13th place.
Johan Stigefelt – Team Manager
“It was a good race for Adam today! He made a great start and pushed very hard for the first couple of laps to be in the front group. He looked really comfortable being in sixth position for the first two laps but then unfortunately he had an incident in front of him that he had to avoid and we dropped too many positions; at that point he lost touch with the leaders. Nevertheless he got his head down, fought hard and in the end he passed Guevara to take 12th place, which is a good result. Adam has had a good weekend from the start and we’re very happy with his progress and performance here in Japan. He has worked very hard and the team have done a great job.
For Jakub it’s been a very difficult weekend and we had to change the bike a lot; he was never really comfortable, even during the race. We now have to really study all the data from this weekend and see what happened and if it is the bike, we must improve this and give him the best set-up for Australia next weekend.
Overall I’m pleased that both riders took points today and we can leave Japan on a positive note.”
#84 Jakub Kornfeil: P13
“I feel quite good about today’s race, even though the result was not what we had in mind, I really did all I could under the circumstances and never gave up. All weekend we have struggled with the bike and in the race it was no different. This is disappointing. I couldn’t go any faster today. We were expecting more. I made a good start but then in the first corner there was a big crash involving two riders and I was on the outside with nowhere to go. I had to completely slow down and go off track, re-joining last. I immediately started to work my way back up. I just got my head down and went as fast as I could to catch people. It was not easy because I didn’t feel good on the bike but I still did it and gained quite a few places. I had some nice battles but it was not enough to reach our target of the top ten today. I’m disappointed about this as for sure if the incident hadn’t happened at the start I could have reached my target. Nevertheless we go to Australia with more points and I’m confident that we can do better there.”
#7 Adam Norrodin: P12
“I was really looking forward to this race today after our qualifying; I knew it was a great opportunity to reach my target and score points. I made a really good start and got up to sixth position on the first lap and was able to stay in the first group. The rider behind me was always trying to pass but I was able to defend my position; then in one moment he tried again, overtook and then nearly high-sided, so I had to avoid this and we ended up losing contact with the group. I killed the speed on the straight, so many riders passed me and I dropped down the positions. I tried to catch them again but I had a problem with my knee and I struggled to go much faster. The pain continued to increase so I just tried to keep calm and do as best as I could. It was quite hard to manage but I was able to stay in the points which I’m very happy about. We’ve had a good weekend from the start; it’s been the best this year, so I’m really looking forward to the next two races.” 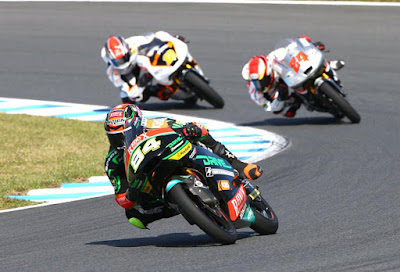