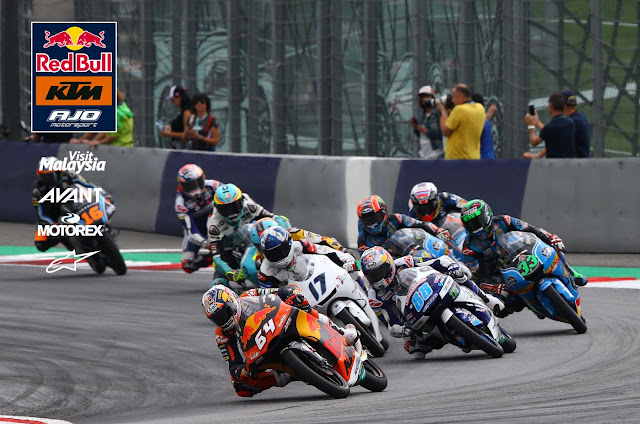 The Austrian Grand Prix ended earlier than expected for the Red Bull KTM Ajo Moto3 riders, who crashed out at the midway point of the race. Two weeks on, Bo Bendsneyder and Niccolo Antonelli will try to bounce back this weekend at Silverstone, which hosts the twelfth round of the season. The venue for the British Grand Prix is a track where both riders have previously placed on the podium.

His crash at the Red Bull Ring was a blow for Bendsneyder, who had shown good pace throughout the weekend and had led the early stages of the race. Content with his progress made over recent Grands Prix, the Dutchman hopes to again fight for a podium at the British GP. He was third last year, in what was his first rostrum finish in the World Championship.

For Antonelli, his third place finish in 2015 was not the first of his career, but is just one example of his affinity for the track. The Italian has a podium, another Top 10 finish and two front row starts from five appearances in the British GP. Like his teammate, the Red Bull KTM Ajo rider also has some fresh ideas after a post-race test day in Austria.

23 NICCOLO ANTONELLI
"Like most of the tracks in the second half of the season, I really like Silverstone. I don’t have a favourite section, but the entire track is very interesting. We’ll see how we do on Friday, but we hope to be quick like we were in Austria and to be as strong as possible. I have always had good results at this Grand Prix. The highlights have been a podium two years ago and two front rows."

64 BO BENDSNEYDER
"I can’t wait to get to Silverstone, where last year I took my first podium in the World Championship. I really like this Grand Prix. Over the last few races we have been fighting near the Top 5, and even for the podium, so we’ll see where we can finish this weekend. In the post-race test after the Austrian GP were able to try out some things that were positive, allowing us to improve our pace and braking. We have to focus and work hard from the first minute of FP1 to the last second of the warmup. We will give everything in the race to repeat a great result."