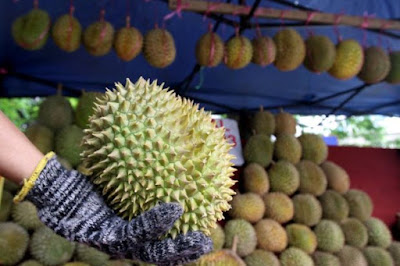 PUTRAJAYA: A three-day festival promoting Malaysian durians will be held in China from Oct 19 to 21 in Nanning, said Datuk Seri Ahmad Shabery Cheek.

The Agriculture and Agro-Industries Minister said on Wednesday that the event is aimed to give mainland Chinese a taste of fresh durians.

Ahmad Shabery added that 250 distinct, durian-derived products would be on display at the festival, with 50 booths for durian product manufacturers.

"If Thailand is known for its tom yam, the Koreans have their kimchi, and the Japanese with sushi, I hope that through events like this, Malaysia will one day be recognised for its durians," said Ahmad Shabery.

Ahmad Shabery said this when speaking to the media after a Road to Nanning meeting with durian industry players on Wednesday afternoon.

He said that he hopes the festival will speed up the approval process for Malaysia to export fresh durians to China.

For durian product sellers such as Aesos Lai who owns Sunshine Kingdom Sdn Bhd, the festival is a welcome chance to network with Chinese distributors.

His company markets a variety of products ranging from freeze-dried durians, chocolates and coffee containing durian, with a turnover of RM5mil a year.

"It's a good opportunity, especially since some of the Chinese distributors have very large networks. This means strong prospects for us," said Lai.

Meanwhile, Subang Bestari-based Rohazawati Mamat said she was looking to expand overseas with her durian crepes.

"We've been running for four years now, and we usually churn out about 4,000 packets a week to supply 150 retailers around the Klang Valley. But it's also good to expand. Increasing our production is not a problem," said Rohazawati.

Malaysia's durian products first gained access to China's market back in 2011, and RM1.57mil in products - frozen durian, pulp and derived products - were exported in 2012.