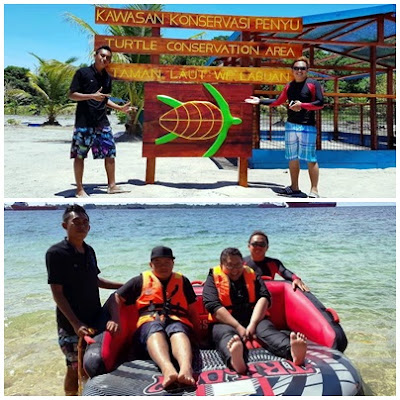 Equipped with four speed boats to run the sea transport sector, the company can now heaved a sigh of relief as more than 1,000 people have so far signed up as their regular customers and tourists.

Its director, Mohamad Rosli Ramani, 25, said his involvement in the tourism industry came about when he saw the potential of such tourism products found in Labuan.

"These people are not only locals but also from outside of the island who have been to at least four attractive islands for various water sports, recreational diving and snorkelling.

"We have Rusukan Kecil and Rusukan Besar Islands for recreational diving, snorkelling and witnessing the turtle hatching and being released, and we have Papan Island for various water sport activities,' he said during an exclusive 'Three Island Tour' with Bernama on Saturday.  He said the Rusukan Islands were very popular due to the existence of various ocean life, coupled with the still intact condition of coral reefs.

"We thanked the government for its attention to the island's tourism sector in view of the ongoing slowdown of the economy, and now we play our role as the local tour activity provider to the tourists and visitors," Rosli said.

His partner, Mohd Nur Faiz Anuar, also 25, said the hospitality and tourism was one of the industries that was most affected by digital development.

"Transportation and accommodation companies are among the first ones to utilise digital marketing techniques in their ventures to engage tourist and communities and make sure their customers have the best possible away-from-home experience," he said.  He said in order to perform well and gain competitive advantages, players in the travel industry were always looking for the newest and greatest ways to reach their buyer persona and tailor their offering to their target audience.

When planning travel, he said tourists tended to look for companies with a social media presence on established social media networks, and they are also interested in big brand names and prestige, alongside a online mobile-optimised booking experience.

He said 'staycations' had been a powerful trend in the last two three years, with many travellers having trended in the direction of sticking around locally to enjoy their vacation time.  "This has been great news for local tour and activity providers and their communities as more people are looking to boost their local economies with trips close to home," said Rosli and Faiz.  They were optimistic the island's tourism industry could be developed further with significant roles played by the tourism players.