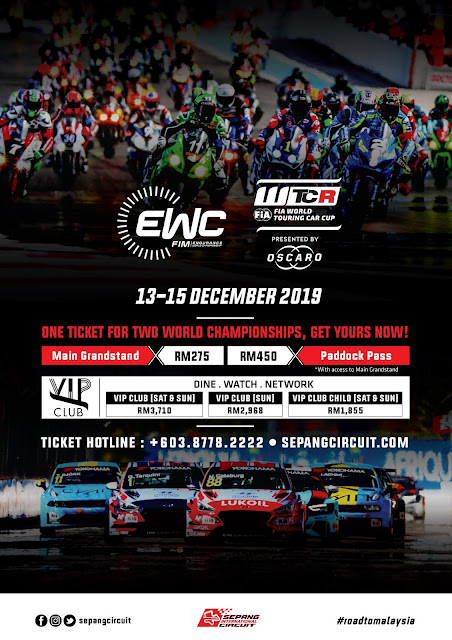 The date is set for a spectacular and ground-breaking festival of motorsport in Malaysia. The FIA World Touring Car Cup and the FIM Endurance World Championship has been made exclusive and ONE-OF-A KIND creating history for Malaysia as SIC host TWO WORLD CHAMPIONSHIPS TOGETHER IN ONE WEEKEND.
The FIA World Touring Car Cup (FIA WTCR) is the highest class of competition for touring cars. The Malaysian round will be the grand finale of the 10 global rounds this season. The race will see 26 full season entries with 8 different car manufacturers.

The FIM Endurance World Championship (FIM EWC) is the premier worldwide endurance motorcycle racing championship. The Sepang round named the 8 Hour of Sepang will see at least 20 Japanese and 10 Asian teams competing as it will be the qualifying round to the legendary Suzuka 8 Hours in 2020.
Both races will take place until sunset and the chequered flag will be waived under the new SIC Circuit Lights.

Come and witness these exciting world-class championships as they make their #RoadToMalaysia.
One ticket for two world championships!
-Sepang Circuit.
https://www.sepangcircuit.com/ticketing/wtcr-ewc/wtcr-ewc
Posted by PelanconganKini at 7/25/2019 02:36:00 pm