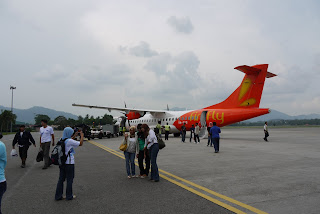 KUALA LUMPUR, March 15 (Bernama) -- Community airline Firefly recorded RM1.8 million sales at the three-day Malaysian Association of Tour and Travel Agents (MATTA) Fair 2010 which ended here on March 14. Head of Firefly Holiday, Lau Yin May, said that sales at the travel and tourism fair exceeded the airline's target of RM1.5 million. "Our sales at MATTA fairs just keep on getting better and better, and this is definitely the most successful MATTA Fair that we have participated in," she said in a statement on Monday.

The airline said its latest Firefly Mobile Booking feature contributed RM30,000 sales at MATTA Fair this year. "The figure further convinces Firefly that mobile booking is a potential medium of booking and purchasing flights tickets in the coming future," it said. Firefly is operated under FlyFirefly Sdn Bhd, a wholly-owned subsidiary of Malaysian Airline System Bhd. It received the "Best Value Airline of the Year" award at the 2010 Frost and Sullivan Asia Pacific Aerospace and Defence Awards.
http://www.fireflyz.com.my/
Posted by PelanconganKini at 3/15/2010 06:25:00 pm

Email ThisBlogThis!Share to TwitterShare to FacebookShare to Pinterest
Labels: Airlines