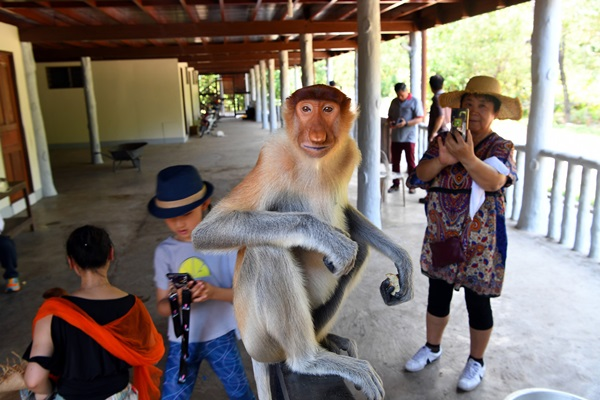 SANDAKAN, May 5 (Bernama) -- Wildlife tourism has become the latest crowd-puller in the Sandakan district.

One of the main attractions is the Labuk Bay Proboscis Monkey Sanctuary located in a private oil palm plantation in the Semawang mangrove forest, about 48km from the Sandakan city centre.

Droves of foreign and domestic tourists visit the sanctuary to take a closer look at the unique species with an unusually large nose.

The conservation centre was built by the plantation owner who found the monkeys living in the mangroves by the sea after getting advice from the relevant authorities.

Two wooden platforms, A and B, have been built in the area to serve food such as cucumber slices and bland 'pancakes' to the creatures.

The two platforms have been built two kilometres apart from each other to avoid a clash between groups of the monkeys.

Travel guide Mohamad Jonathan, 35, told Bernama that the monkeys feasted on the leaves of mangrove trees in the area, and the food served at the platform was only part of a supplementary diet, with no guarantee that the animals would come during the prescribed feeding times.

However, he said the monkeys usually come to the area (platforms) and travellers would not be disappointed.

"I am happy to see the monkeys, my duty is to give them food, and many tourists who come to the sanctuary get to see them," said Mohamad, who has worked in the sanctuary since 2008.

Visitors, he added, were prohibited from touching the wild animals, even if they were approached by them.

Another wildlife tourism product synonymous with Sandakan is the Sepilok Orangutan Rehabilitation Centre (SORC) situated about 18km from the city.

Here, visitors can take a closer look at orangutans during their feeding times at 10am and 3pm every day.

Workers at the conservation centre operated by the Sabah Wildlife Department would place vegetables and bananas on a platform for the furry creatures to devour during those times.

Efforts to conserve the endangered species are at the forefront of the centre and billboards educating the public on the importance of safeguarding the national treasure can be seen all around the district.

Meanwhile, situated next to the SORC is the Borneo Sun Bear Conservation Centre established in 2008, to allow visitors to take a closer look at the species listed as ‘vulnerable’ in the World Conservation Union’s Red List.

The 2.5-hectare centre houses more than 40 sun bears, and provides various facilities to the animals including nutrition and rehabilitation to help bears return to their natural habitat.
-bernama.
https://www.sabahtourism.com
Posted by PelanconganKini at 5/07/2019 02:13:00 pm