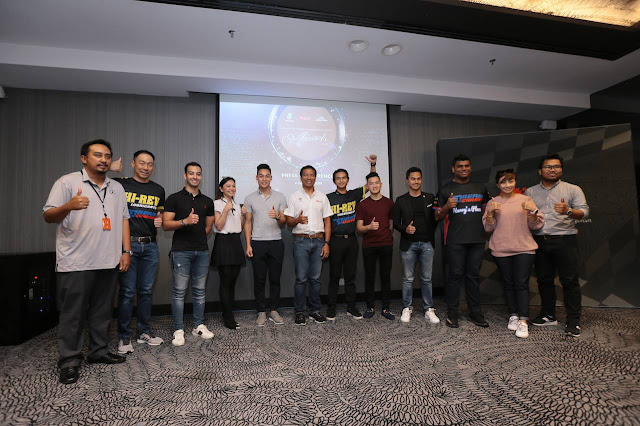 SEPANG, 4th February 2019 – The time has come to once again honour Malaysia’s top achievers in motorsports at the 3rd SIC Motorsports Association of Malaysia (MAM) Awards 2018, which will be held at the W Kuala Lumpur on 12th of February 2019.

This year, Malaysia’s oil and gas giant PETRONAS has joined hands for the award ceremony as a partner. PETRONAS’ relationship with Malaysian motorsports is deeply rooted in the past decades and most recently, PETRONAS – together with SIC – took a historic step in motorsports history when they launched the first Malaysian-owned MotoGP team, the PETRONAS Yamaha Sepang Racing Team.

Oakley will be the official eyewear for the awards that will see a stellar line-up of motorsports heroes across 14 categories including two-wheel and four-wheel racing take the spotlight for the day. The premium eyewear will also be presented to the award winners.

Among those headlining the nominees are Malaysia’s first MotoGP rider and the big winner of last year’s award, Hafizh Syahrin Abdullah, who will be gunning for the top PETRONAS International Rider of the Year award. Standing in his way are Azlan Shah Kamaruzaman who won fourth overall at Asia Road Racing Supersport 600 category; Habibullah Mohd Salleh, the FIM Supermoto overall champion; Danial Syahmi Shahril who finished fourth in the Idemitsu Asia Talent Cup; and Muhammad Helmi Azman who was crowned as the Underbone 150 champion in the FIM Asia Road Racing Championship.

Lining up for the PETRONAS International Driver of the Year award are the World Endurance Championship trio – Jazeman Jaafar, Nabil Jeffri and Weiron Tan – who made history by being the all-Malaysian team to participate in the prestigious 24 Hours of LeMans race in France, where they finished fourth in the LMP2 class. The trio was the first Asian line up to win the fourth round of the World Endurance Championship at the 6 Hours of Fuji. Afiq Ikhwan Yazid, the race winner at the Lamborghini Super Trofeo World Finals (Pro) at Vallelunga, Italy and champion of Lamborghini Asia Pro Class; and Mitchell Cheah who finished second overall in the TCR Asia Series and champion of TCR South East Asia.

“Malaysian motorsport talents achieved tremendous success locally and abroad last year, and it is a sign of progress that we dearly wanted to see every time we put our plans into motion,” said Dato’ Razlan.

“Therefore, it is essential to recognise the hard work put in not only by these amazing talents but also those around them who worked hard to ensure that success is achieved.

“I would also like to welcome PETRONAS – a name that has fuelled Malaysian motorsports for years – on board as the main sponsor for the award this year.”

Besides the PETRONAS International Rider and Driver of the Year awards, the other award categories are SIC Best Team (two wheels and four wheels) for the most dynamic and successful team, National Rider and Driver of the Year for the most outstanding achievers in their respective championships and the ever popular category Malaysia Motorsports People's Choice Award where fans can vote for their favourite heroes online.

The event will also honour the Most Improved Rider and Driver of the Year for recognising the individuals who have performed exceptionally in 2018. Two new categories are introduced this year; the Most Inspiring Female Motorsports Athlete and the Best e-Motorsports Athlete – an award that is to be given to two winners from ten finalists of SIC’s e-MCS competition that was held in conjunction with the 2018 Malaysia Championship Series (MCS) and paving the way for e-Motorsports championship in Malaysia. The two winners will get to race in the 2019 MCS season fully sponsored by SIC under team Dream Chasers.

A special award – the KBS Motorsports Development Award – will see recipients nominated and chosen by the Ministry of Youth and Sports (KBS). It is awarded explicitly for drivers or riders in the ministry’s motorsports development programmes.

The award ceremony will also see new inductees honoured into the Malaysian Motorsport Hall of Fame. For the first time, the Lifetime Achievement award will be introduced to honour the contributions and sacrifices of the individual to develop and gain recognition for Malaysian motorsports.

All nominees are selected by a list of individuals comprising experts and individuals who have played a vital role in the motorsports industry. The winners will be announced at the awards night.