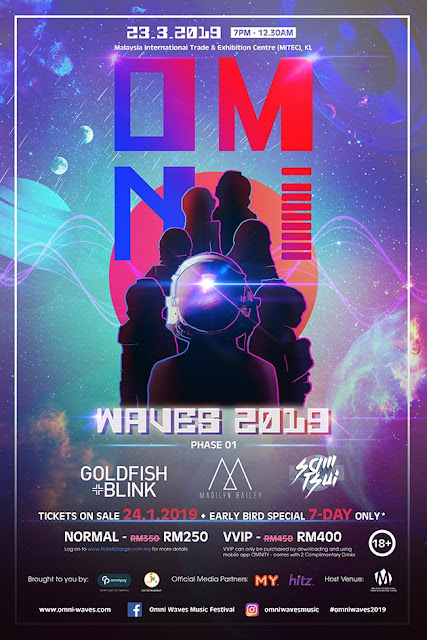 Minds will be blown at OMNI, Malaysia’s first-ever and largest indoor live music festival!
Take your senses on an epic, transcendental space odyssey as OMNI whisks you across galaxies of many genres to the tune of live performances by stellar artists.
Combining psychedelic light and sound effects with an out-of-this-world stage design and captivating pyro effects, your voyage with OMNI will surely uplift your mind to a whole new soundscape.
No spacesuit required. Standby for lift-off.

Samuel Tsui is an American singer/songwriter and video producer. In 2011, Tsui debuted his own YouTube channel, apart from his collaboration with Kurt Schneider. Tsui has collaborated with fellow musician Kurt Hugo Schneider since high school, when the pair recorded music with an electronic keyboard and GarageBand. As of April 2017, the YouTube channel "KurtHugoSchneider" has garnered over 2.1 billion total views and over 8 million subscribers. His videos have been described by Time as a combination of Glee and Attack of the Clones.

Alvin Teoh, aka Goldfish and Lau Hoe Yin, aka Blink, met a decade ago and started collaborating as a team over the recent years "Goldfish & Blink" has been in the forefront of the DJing culture in Malaysia, quickly establishing a unique style through their music backgrounds and versatality in production styles.

Madilyn Bailey Wold is an American singer and songwriter.Bailey began her career shortly before graduating by covering popular songs and posting them on YouTube, which gathered over 100 million views.
-TicketCharge.
https://premier.ticketcharge.com.my/shows/show.aspx?sh=OMNIWV19
Posted by PelanconganKini at 1/25/2019 12:25:00 pm