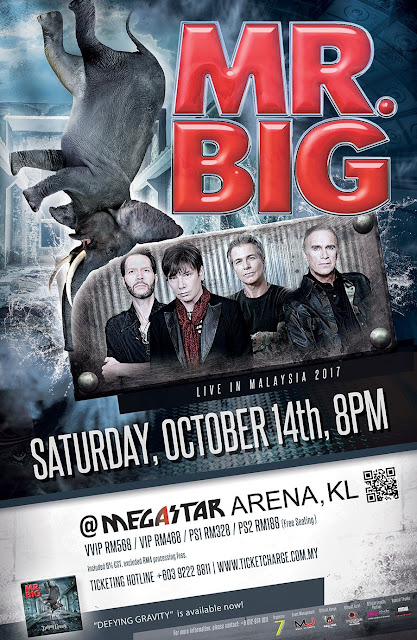 The concert is in support of their latest album “Defying Gravity”, which was fully recorded in only 6 days. Fans can expect a night of nostalgia while rocking out to classic hits along with surprise gems from their recent releases.

Formed in 1988, Mr Big immediately made their mark in history. Best known for their classic chart topper "To Be With You" that led to major international success and multi-platinum record sales, Mr Big have remained active and popular throughout decades of changing music trends.

The band went through a breakup in 2002, but after overwhelming requests from fans, got back together in 2009 and have continued rocking the music scene ever since. To date, Mr Big has released a total of nine studio albums.

By combining trademark "shredding" musicianship with awesome vocal harmonies, Mr Big has produced a number of hit songs across a wide array of rock genres – be it ballads, heavy metal, or blues rock, such as “Alive and Kicking” and "Just Take My Heart". Their musical features have touched fans all over the world.

Tickets are available via TicketCharge at www.ticketcharge.com.my or call +603 9222 8811. VVIP tickets are exclusively available via the organizer Plan 7 Production at +6012 974 1011 or visit www.facebook.com/Plan7Production/.