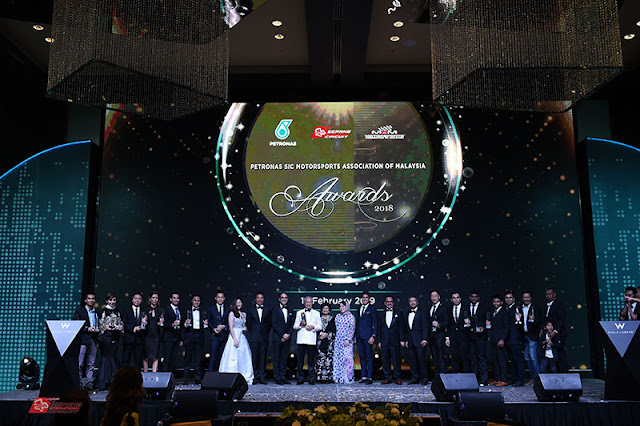 From conceiving the idea of having a national car, thus paving the way for the development of local talents and technology in the automotive industry, to the brainchild behind the build up of Sepang International Circuit (SIC) and inspiring Malaysians to make a mark in motorsports both locally and internationally, Tun Dr. Mahathir has been instrumental in bringing Malaysia to a higher degree of capacity and capability.

Tun Dr. Mahathir is the first recipient of the Lifetime Achievement Award, conferred at the PETRONAS SIC Motorsports Association of Malaysia Awards held at the W Kuala Lumpur.

Entering its third edition, the SIC Motorsports Association of Malaysia Awards is the most prestigious awards event of the year for Malaysian motorsports.

This year, Malaysia’s integrated oil and gas company PETRONAS has partnered with SIC and MAM in bringing recognition to the icons and heroes of Malaysian motorsports, while premium eyewear Oakley was the official eyewear sponsor for the event.

“Tun Dr. Mahathir is, by and large, the person responsible for the spark that started the evolution of modern day motorsports in Malaysia, said Dato’ Razlan.

“Ever since the creation of the Sepang International Circuit in 1999 and introduction of Formula One in Malaysia and South East Asia, Malaysia’s motorsport talents have achieved tremendous success locally and abroad. Within less than 20 years we have young Malaysians racing at the highest level in world motor racing such as Alex Yoong in Formula one, Hafizh Syahrin in MotoGP and our first Malaysian team of Jazeman Jaafar, Nabil Jefri and Weiron Tan in the prestigious 24 Hours of Le Mans.

“Therefore, we hope the recognition given to the winners tonight will continue to be a stimulus for everyone involved – competitors, teams, officials, media, clubs, corporations and fans – in bringing the industry to a higher level,” added Dato’ Razlan.

President and Chief Executive Officer of PETRONAS, Tan Sri Wan Zulkiflee Wan Ariffin said, “On behalf of PETRONAS, we would like to congratulate YAB Tun Dr Mahathir Mohamad on the conferment of the Lifetime Achievement Award for his continuous support and contribution towards the development of the Malaysian motorsports industry.

He added, “PETRONAS’ involvement in the motorsports industry since 1988 is driven by our aspiration to develop local talents, in both the four-wheel and two-wheel categories. The PETRONAS Talent Development Programme (TDP) is one of our significant initiatives towards providing a structured approach in harnessing the capabilities of future motorsports talents and I am proud that the individuals recognized tonight were part of the programme. We hope that they continue to pursue their dreams to make their mark on the world stage.

Hafizh Syahrin Abdullah received the top recognition for his stellar performance in the field of motorsports by winning the PETRONAS International Rider of the Year Award.

The Selangor-born rider, who created history by becoming the first Malaysian to ride in the premier class MotoGP World Championship, also took home the Malaysia Motorsports People’s Choice Award, an award selected by fans via an online vote.

Jazeman Jaafar was named as the PETRONAS International Driver of the Year Award winner following his success in the World Endurance Championship with fellow Malaysians, Nabil Jeffri and Weiron Tan.

Jazeman, together with Jackie Chan DC X JOTA Racing Team members Nabil and Weiron, made history by being the first all-Malaysian team to participate in the prestigious 24 Hours of LeMans race in France, where they finished fourth in the LMP2 class. The trio was also the first Asian line up to win the fourth round of the World Endurance Championship at the 6 Hours of Fuji making them the inductees for the 2018 Malaysian Motorsports Hall of fame for the night.

Both the top winners for the night, Jazeman Jaafar and Hafizh Syahrin were developed and previously sponsored under the PETRONAS talent development programme. As such, PETRONAS involvement is significant in the development of Malaysian motorsports talent.

At the event, 14 competitive awards were presented to individuals and teams who showed exceptional performance in 2018, while six honourees were inducted into the Malaysian Motorsports Hall of Fame which included rally navigator, Allen Oh; legendary go-kart driver, Ng Wai Leong; as well as one of Malaysia’s first Grand Prix’s motorcycle racer, Kuan Huah Chin.

On the national front, Mark Darwin and Muhammad Helmi Azman received honours as the SIC Best National Driver and Rider of the Year, respectively.

SIC and MAM also collaborated with the Sportswriters Association of Malaysia (SAM) to recognise the top motorsports journalist and photographer of the year. SIC-MAM-SAM Media Award was presented to Sukhairi Thani from Berita Harian for Best Journalist category. Meanwhile, the Best Photographer category was won by Riduan Rizal Ahmad from Utusan Malaysia. From TV3, Hasnida Hanim Ahmad Kamil and Aji Saregar received the honours of Best Electronic Media. The award recipients were selected by a panel of judges comprising of expert individuals in the field of two and four wheels motorsports. For the Malaysia Motorsports People’s Choice Award, the winner was selected through online fan voting that ran throughout December and January 2018.

The winners received a crystal trophy and a pair of premium eyewear by Oakley who was also the partner for this prestigious awards night.
The winners of the awards are as follows: