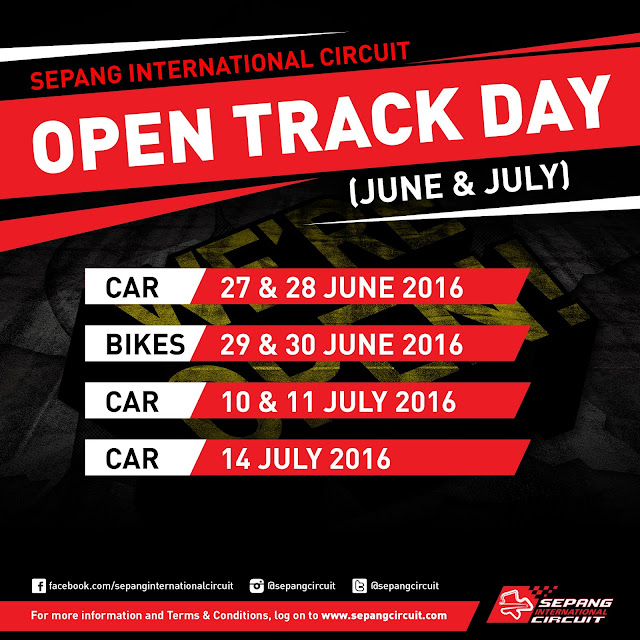 Sepang Circuit Open Track Day are available on the below dates.


For Open Track Day - CarJust walk in & register at the Track Office.The entry fee is only RM318/session.
For Open Track Day - BikesFill up the Registration Form for Pre-Registration and submit the form by email to zulkiflie.zainuddin@sepangcircuit.com(Registration Form can be downloaded HERE )The entry fee is only:Group A: RM159/session for above 400ccGroup B: RM106/session for below 400cc
However, the schedule is provisional and might be change without prior notifications.For those did not attend the RIDER'S BRIEFING will be excluded to participating the track day. Attendance will be recorded based on the pre-registration name. Second Rider's Briefing will be at 10.30 am for the riders who's missed the First Briefing. 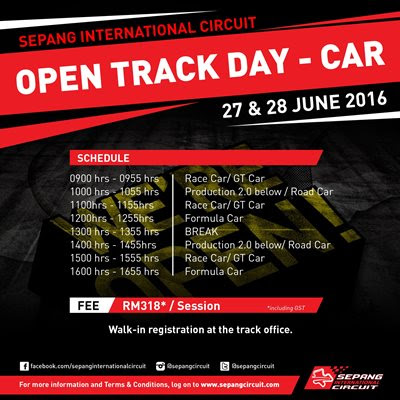 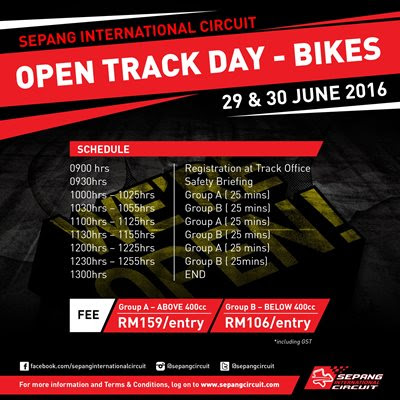 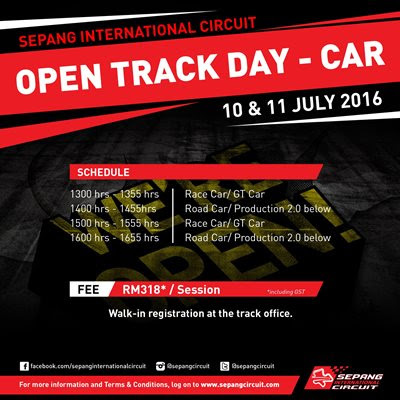 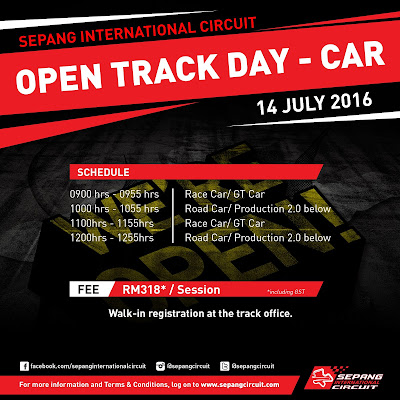 KUALA LUMPUR, June 29 (Bernama) -- The extension of the Ampang and Kelana Jaya light rail transit (LRT) lines to be launched tomorrow is seen as a boost for tourism in the Klang Valley that can help achieve the goal of attracting 12 million tourists to the capital city this year.

Kuala Lumpur Tourism Bureau general manager Nor Aza Yusof said the government's initiative to improve public transportation was seen as a step forward in providing wider access to tourists to explore the beauty and uniqueness of Kuala Lumpur.

She said that apart from benefiting local commuters, the new lines also offered a cheap, easy, quick and safe transportation option for tourists to move from one location to another.

"The LRT extension project also adds value to the tourism industry in Kuala Lumpur, where tourists who use the service have the opportunity to enjoy the scenic views around the city as the LRT tracks are quite high above ground.

"With the addition of routes and stops that offer attractive areas to visit nearby, we expect more tourists to use the LRT over time," she said when contacted by Bernama.

The project is one of the development initiatives of the government to strengthen and integrate the city's public transport services, one of the national key result areas under its transformation programme.

Nor Aza said that in line with the addition of LRT stops, the bureau also intended to provide tour packages to certain locations near these stations.

"We also aim to provide tour guides to disseminate information and provide smooth transit for those who subscribe to the packages," she said.

Meanwhile, the Malaysian Association of Tour and Travel Agents (MATTA) ground transportation deputy president S. Jaya Kumar said the addition of routes and stops to the LRT service made it a top choice for tourists to get around the Klang Valley.

"We can emulate the greatness of public transportation (in other countries) such as the bullet train in Japan and the underground tube in London, which have always been the choice mode of transport for tourists visiting these countries.

He said, however, that shuttle bus services should also be provided for the last mile connectivity to tourist spots.

The LRT line can also be used to get to popular trekking destination such as the Bukit Nanas Forest Reserve, Bukit Tabur, Bukit Gasing and the Ayer Hitam Forest Reserve (Puchong entrance).

It also passes through or near several shopping centres, including Amcorp Mall, Empire Shopping Gallery, One City Mall, Subang Parade, IOI Mall and Setiawalk.
-bernama.
Posted by PelanconganKini at 6/29/2016 10:15:00 pm No comments:

PLUS Gears Up For Aidilfitri Traffic Increase 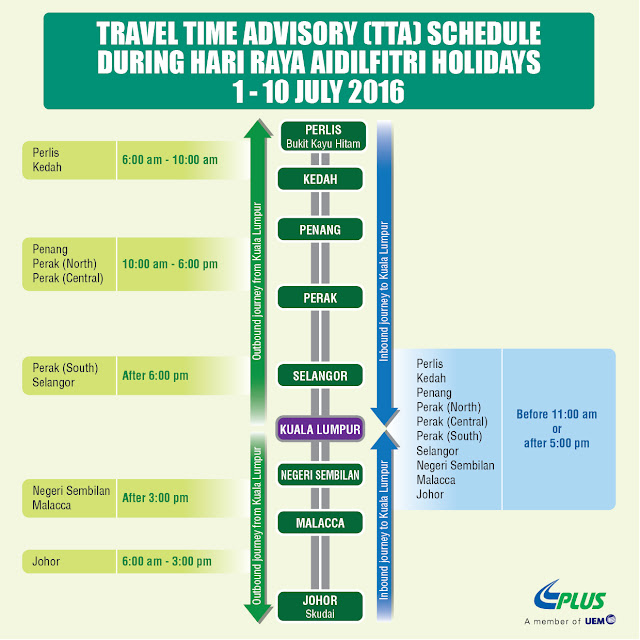 PLUS Malaysia Berhad (PLUS) anticipates 1.6 million vehicles will use the North-South Expressway (NSE) everyday on Peak Days throughout the Hari Raya Aidilfitri holidays, a 20 percent increase from 1.3 million traffic on normal days.


“As such, PLUS will implement various strategies to cope with the traffic increase and at the same time, help the public enjoy smoother and more convenient journey during the holidays,” said PLUS Managing Director, Dato’ Noorizah Hj Abd Hamid.

TTA for Peak Days
As implemented during previous festive seasons, PLUS is also issuing a Travel Time Advisory schedule (TTA) for Peak Days between 1 July and 10 July.
The TTA focuses on traffic distribution and is aimed at reducing traffic congestion on the mainline, most notably at major stretches, toll plazas and rest areas. The schedule is based on studies on the public travel pattern during previous festive seasons.
The TTA is crucial as it helps to prevent highways from entering the highway at the same time and contribute to traffic congestion.

“As such, we advise the public planning to travel on the NSE and the ELITE highway on these Peak Days to follow the TTA. Based on our studies, higher adoption rate of the TTA by the public for outbound and inbound journey had resulted in smoother traffic flow on the mainline,” Noorizah said.

30 Percent Toll Rebate
“As part of an effort to distribute the traffic, PLUS will be offering a 30 percent toll rebate on 4, 8 and 11 July,” Noorizah added.

The 30 percent toll rebate will be given to Class 1 highway users paying toll electronically (via PLUSMiles, Touch ‘n Go cards or SmartTAGs) on 4, 8 and 11 July. The rebate is given to those travelling more than 100 kilometres on the NSE, the ELITE highway.
For example, a highway user travelling between Sungai Besi Toll Plaza and Skudai Toll Plaza will be able to save RM12.39 in a form toll reload as follows:-

The toll rebate can be redeemed at all Customer Service Centres on the PLUS highways between 15 August and 14 November this year.

Improving Highway Level of Service
PLUS will also implement various strategies to improve its overall highway operations and level of service during the upcoming festive season.

“Among the initiatives are deploying more staff on the highways and the traffic monitoring centre (TMC), increasing the number of PLUSRonda teams and patrolling loops, stationing emergency rescue teams at strategic locations, providing additional parking areas and portable toilets at major rest areas, providing additional tow trucks at selected locations, deploying more than 2,300 staff at toll plazas, conducting aerial traffic surveillance and many more,” Noorizah explained.
“In addition, PLUS will open up contra flow at selected stretches on the mainline. However, the contra flow can only be activated based on the current traffic situation and approval from the Police”, Noorizah added.

Highway Traffic Updates
PLUS also advises the public to get the latest traffic updates on the NSE through the PLUSTrafik Twitter service, the PLUS Mobile Apps, the toll free PLUSLine 1800 88 0000, major radio stations and electronic message boards at strategic locations along the highways.
-www.plus.com.my
Posted by PelanconganKini at 6/29/2016 01:05:00 am No comments: