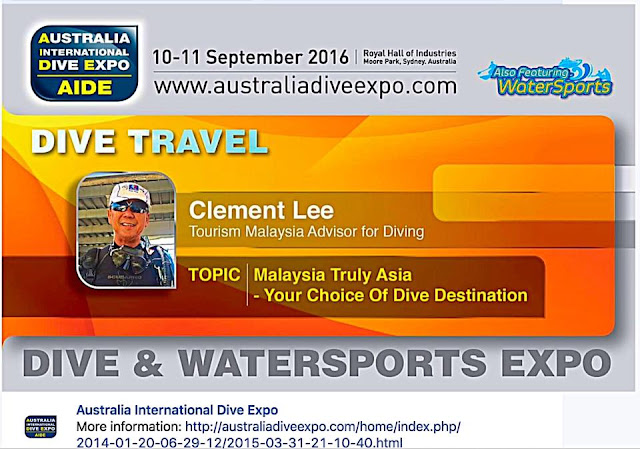 To all Clement's friends particularly those who will be attending AIDE 10 -11th September 2016 in Royal Hall of Industries, Moore Park, Sydney . Clement Lee will be giving two presentation on Malaysia titled


" Malaysia Truly Asia - Your Choice Of Dive Destination "
Date : 10th September ( Saturday) and 11th September ( Sunday )
Time: 11:00am-11:30am ( Both Days)
Venue : Main Stage
Clement will show you why you should choose Malaysia as your next Dive Destination and he will introduce you on Diving in Sarawak and also Avillion Layang Layang and all Dive destination in Malaysia including Borneo States of Sabah and Sarawak.


CLEMENT LEE
Topic 1: "MALAYSIA TRULY ASIA – YOUR CHOICE DIVE DESTINATION"
SPEAKER'S PROFILE: Clement Lee, has been in the Dive Industry spanning over 30 years, one of the pioneer in diving tourism in Sabah as well as pioneer in the now renown Sipadan island, though Clement retired in 2012 he has been very active in scuba diving and conservation program.
He was awarded the prestigious DEMA Reaching Out Award in 2008 in Las Vegas and became the only one from this region to be inducted into the International Scuba Diver Hall of Fame in Cayman in 2011.
Appointed as Tourism Malaysia Advisor of Diving in 2015, Clement has travelled extensively to promoting diving in Malaysia and giving presentation/talks all over the world.
Just recently Clement was also appointed as PADI AmbassaDiver and his roles will be promoting certification, conservation (Project AWARE I) and also promote the Diving tourism.
www.malaysia.travel