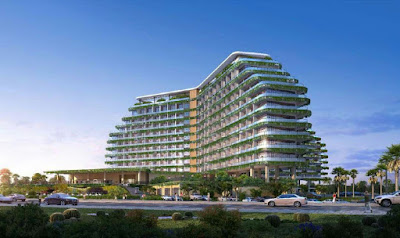 GELANG PATAH: The master developer of Forest City launched a major component of its second phase of development with the soft launch of a RM1.8 billion posh and exquisite golf resort sprawling over a 809ha site.


Country Garden Pacificview Sdn Bhd unveiled the new Forest City Golf Hotel with much fanfare today with a preview for the media.


The five-star golf resort comprises three interconnected golf courses, which will be flanked with luxurious villas with modern European design concepts slated for completion within the next two years.


A statement from Country Garden Pacificview said that 202 units of luxury villas were being offered to potential home owners.

When fully completed, the low-density residential enclave is expected to have a total population of only about 1,300 residents.


"The landed properties are expected to be completed by October 2019 and comprise double-storey and three-storey cluster homes and semi-detached units with size ranges of 2,034 sq ft to 6,975 sq ft.


"The properties are pegged from RM1.38 million onwards. They are built near a natural water feature which cuts across the golf course.


"Under the first phase, Country Garden Pacificview (CGPV) will unveil 202 units of villas with modern style roofs and a combination of design elements from across Europe," said the statement.


There will be two towers of hotel rooms, each 11-storeys high, with a ballroom that can cater to 400 pax, a free form swimming pool and children's pool.


"The hotel which is targeting guests from Malaysia, China, Singapore and Korea, among others, features a restaurant that serves international and local cuisine," it said.


A new 9.6m road is being built between Forest City and the hotel and it will be ready by 2019.


He said that besides attracting tourists and golfers to Forest City, the developments will provide jobs to Johor folk.


“The establishment of these new developments will spell good news for locals as there will be a total of 460 job opportunities with 250 vacancies in hotel and 210 for the golf courses.


"To date, we have a total number of 85 staff at the hotel and the first golf course, of which 100 per cent are locals. More will be employed when the hotel is completed," said Md Othman.


Located next to the golf resort is Forest City's RM2.6 billion industrial building system (IBS) factory, which started operations in August this year.
The IBS factory, once fully completed, will be the largest of its kind in the world.
-nst online.

Email ThisBlogThis!Share to TwitterShare to FacebookShare to Pinterest
Labels: Hotels and Resorts