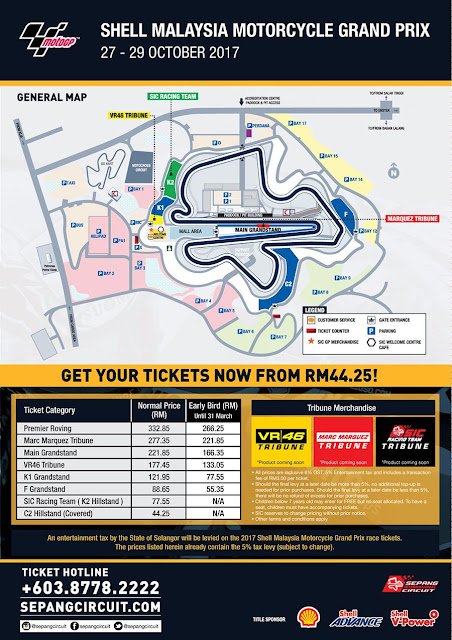 October will be another Month of Motorsports in Malaysia this 2017! The Shell Malaysia Motorcycle Grand Prix 2017 returns on 27 to 29 October 2017, again as the penultimate race in the MotoGP calendar, 4 weeks after the Malaysia F1 Grand Prix. With the event selling out in recent years and crowd numbers breaking records year after year, the Malaysia MotoGP looks set to be another hit this 2017.

Race weekend will be bigger and better with more exciting action and activities to attract fans this year. Nevertheless, the key attraction remains the riders. Fans will once again be able to cheer on our Malaysian riders. Hafizh Syahrin Abdullah returns with the Petronas Raceline Malaysia team in Moto2, while Khairul Idham Pawi also moves up to Moto2 with Idemitsu Honda Team Asia.

In Moto3, SIC Racing Team’s Adam Norrodin is seeking greater success in his second season, together with new teammate Ayumu Sasaki, who will certainly be aiming to be one of the year’s top rookies. The Malaysia MotoGP will also see action from some of Asia’s top young riders in the Idemitsu Asia Talent Cup. This year, Malaysia is represented by 3 riders – Muhammad Haziq Mohamad Hamdan, Syarul Yusloe Suhaimi and Azroy Hakeem Anuar.