Teal Is The Colour Of Speed 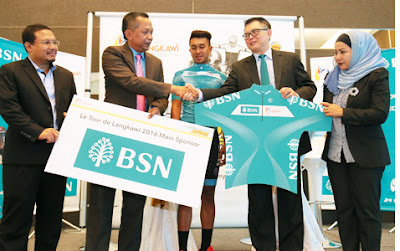 KUALA LUMPUR – Fans of Le Tour de Langkawi will get accustomed to a new colour when watching the stages dedicated to sprinters as the leader of the points classification will be wearing a teal jersey made by Ciclista. It is the trademark of incoming sponsor Bank Simpanan Nasional (BSN).

“As we welcome BSN into the LTdL family, we are delighted to introduce this new colour in the world of cycling”, said the CEO of Le Tour de Langkawi Emir Abdul Jalal.

“It’s a beautiful one, made by mixing green and blue, which were successively the colours of the points classification leader jersey at LTdL. It was green before 2010 and blue since. Yellow is known as the colour of the overall leader of the race like at the Tour de France but bike race organizers are entitled to choose the colours of the different distinctive jerseys. So for us, teal is the new colour of speed.”

“Following our recent rebranding, we are pleased to bring a new touch to this renowned event that has been taking place for more than 20 years. We want to reach out to Malaysians and build relationships in ways that matter to them, and supporting sports as well as sports tourism is a good way to achieve this. Supporting a major sporting event is also an effective way to build brand recognition for BSN and change public perceptions of our identity and how we have evolved. Le Tour de Langkawi is an excellent fit as the cyclists are fast, dynamic and constantly moving forward just like the bank is – particularly the Sprint King Champion who will be wearing the new teal jersey,” said Frederick Siew, Deputy Chief Executive of BSN.

He also added, “Besides sponsoring the Sprint Champion Jersey, BSN is also the Prize Money Presenter sponsor. We are excited to be part of this prestigious cycling event as the competition route covers 8 stages which involves 8 states and 2 Federal Territories. This allows us to have our on ground presence and reach out direct to our customers. BSN will have its promotional booth at all these stages and we plan for on ground activation activities through out the competition.”

The points classification is often regarded as the sprinters’ challenge. However, it’s not only about winning bunch sprints. It’s in reality the reward for consistency. “Every day, there are points up for grabs, three times a day at intermediate sprints and once on the finishing line”, Emir explained. “Riders are welcome to score points in a solo effort or to contest them in a small group of frontrunners. Le Tour de Langkawi is known as a sprinters’ affair but we can expect some surprises this year with some subtle routes like in Penang on stage 2. It’ll be up to the sport directors of different teams to set up tactics for different scenarios.”

In the 20-year history of LTdL, only two non-sprinters have won the competition: Italian attacker and domestique “Niki” Loda riding for MG-Technogym at the service of Luca Scinto in 1997 and “silver fox” Graeme Miller from New Zealand whose never-give-up attitude earned him the jersey in 1999 at the age of 39. Eventual world champion in 2006 and 2007 Paolo Bettini who won the competition in 2001 was also not a pure sprinter but he had won two bunch sprints, one of them on the penultimate day after the Genting Highlands stage where most of the sprinters, including green jersey wearer Jans Koerts from Mercury, got eliminated for finishing beyond the time cut.

“We’re yet to receive the entry forms of some the 22 teams but I can reveal that Guardini will be back to Malaysia with Astana again”, Emir informed. “He’ll obviously be the hot favourite for our brand new teal jersey but he’ll face a fierce competition once again, in particular from Matt Goss of One Pro Cycling.”