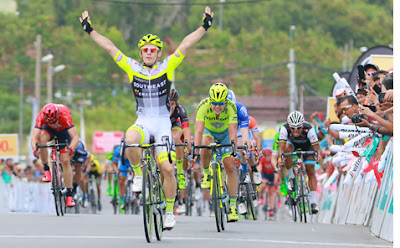 REMBAU - In a very eventful stage 6 in the 21st Le Tour de Langkawi, Jakub Mareczko of Southeast claimed his first ever victory in the Malaysian event he’s taking part in for the second time while a mechanical incident with 6km to go deprived Colombia’s Miguel Angel Lopez from Astana of the overall lead. South Africa Reinardt Janse van Rensburg racing for Dimension Data took over although he was victim of a crash with 500 metres to go, which prevented him from contesting the stage victory he was looking for. Juraj Sagan of Tinkoff and Dylan Page from Roth finished second and third respectively in Rembau.

Putt rode away solo from that group but it was George Harper of One Pro Cycling who passed the last King of the Mountain sprint in first position with 8km to go at Bukit Miku. He was caught in the downhill where Lopez had a broken wheel with 6km to go. The race leader chased hard but couldn’t return to the peloton before the sprint. It was an acrobatic one with a sharp u-turn. Mareczko made the best of it.

“It’s been a bit difficult for me to take part in the sprints early on because there have been a few crashes, but today finally I managed to make it”, the Italian commented. “Today there were more KOM primes than usual. It wasn’t easy to hold the place but my teammates kept me in the main group. In the last few corners in the run in to the finish, I stayed in the first three so I was in the right position for sprinting.”

It was a day for new names to appear on the results sheet. “It was a very nervous sprint”, Page explained. “I use my brakes the best I could to get this result, which is a great one for me since I’m a neo pro and we’re a new team in this category of racing. I crashed on stage 2 and I’ve struggled to sleep since but I’m back! This race has a great organisation. It’s a super Tour!”

Sagan isn’t exactly a new name in cycling but Peter’s elder brother Juraj isn’t usually the one who gets on stage to receive the laurels. “I’m always helping others”, the Slovakian said. “But today I had the green light because our sprinter Michael Kolar had a flat tyre with 7km to go. This is my first international result as a pro. I’m quite happy with it.”

Andrea Guardini didn’t contest the sprint. “I was a bit full gas at 15km to go and I took the decision to leave this stage for rest and try to win another stage – tomorrow or the last stage”, the leader of the points competition said. This was harder than the other stages. It’s unfortunate than my team-mate Lopez lost the yellow jersey due to a mechanical but that’s part of cycling.”

It resulted in a change of leadership in the overall ranking. “I am really sorry for Lopez to lose the jersey in such a way”, Janse van Rensburg noted. “It is not the nicest way to take the jersey. I was looking forward to a bit more of a battle for the jersey, but I guess it’s cycling… But after the line I was a little bit disappointed because I missed my chance to go for the victory today. Some guys went straight into me in the corner, so I didn’t make the corner at 500m to go. My chain was off after that so I had to stop to put it back on.

“It is kind of bitter sweet today, but yeah … I take it as it comes. The race changes now completely for us. We are going to have to defend. The bunch is really getting aggressive now, so I think it’s going to be quite a big fight tomorrow, and there is quite a climb early on. So we are going to have to be top of our game coming out.”

Stage 7 from Seremban to Parit Sulong is the longest of the event with 202.3km.
-www.ltdl.com.my